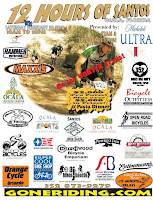 Being that it has been rainy, snowy and just downright cold and mucky in Charleston, I had been quite sick of the cold and wet stuff, so when the calendar showed 12 Hours of Santos coming up, I was more than ready to take the trip down south for a day and bask in the predicted warmth of the sun....Talk about perfect weather! Rode down with Dave and Robert in the coolest road trip van on the planet ready for a great day of riding on Saturday. Uneventful smooth trip down south with the temperature climbing steadily as we drove. Arriving in great time, we setup camp, watched the freeriders blasting off the jumps and went for a few pre-race laps...My legs felt great! I felt great...I guess being on a road bike for the last 2 months with nonstop headwinds really makes you appreciate the vacuum-like quality of a tight, fast, twisty trail with little or no wind resistance. It was definitely worth the trip. I took a decent speed lap, then another at a lower speed, then played for a while on the rocky stuff looking for easy climb lines...Took time off the bike, waited for Mark, Mike and Nick to roll in and watched Niner & everyone else setup for awhile and hastily went for our annual Mexican food feast. I order 2 entrees with extra guacamole to make sure I had plenty in the tank for tomorrow's adventure and ate every bit of it. That night, the usual Santos campout revelry occurred at a much higher volume than last year possibly due in some part to an alleged conspiracy to keep everyone awake and miserable throughout the night. I heard Dave planning a revolt outside my tent and lots of mutual agreement, but I was so tired from the past week's lack of sleep due to work, that I greeted Morpheus with open arms...

Saturday came up nice and smooth until some of our guys started honking their car horns to annoy the other camps, oh well...The organizers of Santos(GoneRiding.com) had a great breakfast spread laid out for the riders complete with oatmeal, coffee, cheese danish and cereal! I ate happily and got suited up for a full day's worth of riding. Have you noticed yet, how I have not complained once about cold weather? It was THAT warm! It was a great day for a race. As always, from that moment on, everything went into fast forward and before I knew it I was running up a hill with a bunch of other nuts in search of our bikes to hastily make our way onto the singletrack express. I actually got into the woods pretty smoothly and proceeded to tag onto some steadily paced riders. The pain train rolled onwards without any major issues through lap#1. I skipped pitting since I did not need anything vital and went out for a full fresh lap. After opening up the legs a bit more throughout lap#2, I realized this was going to be an excellent day for me as I did not have any signs of hesitation when demanding more power. I eased back to make sure I would make it and settled into a very nice pace. I rode strong through lap#4 and then suffered a major setback which possibly cost me a chance at the podium...chain snap! Upon leaving the twisty singletrack, you enter back into a section of the "Vortex" before making your way back to the pit area. The Vortex is a mixture of tight turns and punchy uphill climbs. I went to redline the heartrate to get up the climb, fast and quickly, when my chain snapped without warning. I spun out but thanks to the steady platform of my new Time ATAC pedals, I was able to keep from smacking my knees and "tenders" on any section of my frame. I quickly unclipped pulled my bike over to the side and tried to assess what to do. I looked for the broken chain link, but could not find it. I was not sure what to do, as I could not fix it immediately and wasted a large amount of time making a decision. I finally stuck with just running the bike through the remainder of the lap and fixing it once in the pit area. I ran in, fixed the bike, got back on and took off again trying to makeup for lost time. I actually fell back into a rhythm and decided I would probably be dead last, but I was determined to finish my goal of at least 10 laps. Lap#10 came up quick and next thing I knew there was still plenty of time for more laps! I hooked up my Ayup lights(which worked perfectly) and took off for more pain. Santos was really starting to abuse me around this time as the lava rocks in the course are unforgiving and staggered to make it hard to float over them with precision so I slowed down. 2 singlespeeders caught and passed me in lap#11, and I worked hard to pass them back. We played like this for a while at the beginning of Lap#12 and then I finally noticed both guys suffering in different sections of the trail due to major cramps which allowed me to pass and drop them with ease. I was also feeling weak, but not that weak....I came in off Lap#12 at 9:23 and decided to not go back out for another lap since I thought both of the other guys were 1 lap up on me anyways. I later found out that only one of them was a lap up, so I could have clinched 4th place! If it were not for my chain breaking, I may have had a chance for 3rd place and that would have been fantastic, but nonetheless, this race was a major victory for me to actually tackle and finish a 12 hour endurance race which was truly an unknown to me.

Overall, my hands were hamburger meat, my legs were cooked, and my rear end was chaffed beyond belief, but my passion for lap racing grew a little more. I learned more about what kind of strategy I should try next time as well as how to eat & drink a bit more efficiently. My goal was to complete a 12 hour race with at least 10 laps. I more than satisfied that goal and certainly look forward to next year! I could not have even come close to this goal if it wasn't for Dave Hall's coaching tips and his leading of the WBL this winter which was hosted by the Charleston Bicycle Shoppe. Thanks to Mike from Niner bikes to assist me in the pit area when in need of some quick thinking and reconfiguring of my lights for the night laps, he really helped me out when I just could not think straight anymore.

12 Hours of Santos is quickly becoming one of my favorite races of the year, not only because of the warmth of Florida, but also because of the great people who come down to race, assist, and just generally be a part of it all. Did I mention all the cool looking bikes rolling around out there? Awesome stuff!

No GPS stats available since it went berzerk at around lap#2.
I believe I may have killed it at the Snake Creek Gap in the nasty elements. :(

Up next, The Snake Creek Gap Time Trial#3!