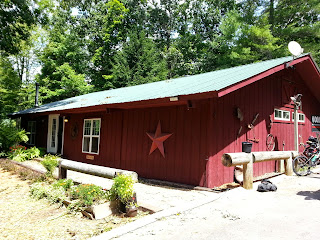 So after the exhilaration of making it to the border simmer down, I found myself rolling along in the seat of Andrew Gate's suv.  My bike was somewhere on the back and my mind was floating between reality and the single track I had just come down off of.  I still could not believe I had finished such a massive stretch of distance with an equally massive amount of vertical feet of climbing.  It was still so surreal.  The ride back to Mulberry Gap was a blur only filled in with the comical antics of Colin eating every bit of candy and junk food in the car that he could find.  I still could not really eat, but I was focused on rehydrating and I found a true common ground with coconut water and juice.  It quenched and felt good on my raspy throat.  As we entered Mulberry Gap, I parked my rig inside the Barn and proceeded to the showers to clean myself off after that last push which consisted of around 18 hours in the saddle.  The chafing was still very painful, but I cleaned and treated everything to the best of my knowledge and slid into nice dry clothing.  It was an immediate mental boost.  I brushed my crusty teeth, put away all my dirty clothes and setup my spot in my cabin bunk.  I then limped back over to the barn for drinks, dinner and conversation.  I went through about 3 beers in an hour and never felt a buzz as my body was so jacked on caffeine and adrenaline that I could not come down from yet.  I met another finisher Michael Kurelja who had finished strong and was still not wanting to leave Mulberry, of which I could not blame him.  This place is incredible!  Warm, inviting, sincere people working and living here with immediate access to Pinohti 2 & 3 trail systems!  Colin was a wreck and could not drink a beer, but held in there and shared his gift of conversation with the group.  We all babbled about the common obstacles we had faced and how everyone had done.  It was a conversation which wrapped into many hours in and around an incredible dinner rich with proteins and real vegetables and more!  It was most definitely the pot of gold at the end of the rainbow.  As we sat there relaxing and still talking about all things TNGA, another rider, Asa Marshall, came to join us.  His vivid knowledge of all the issues and troubles we had encountered helped filled in the vague blanks in trail names and locations.  He kept the conversation going strong by sharing fruit, chips, and ice cream with us.  Such a great night.  I limped back to my cabin bunk and passed out as soon as my head hit the pillow.  I woke at first light to see Colin surfing the web on his phone.  He blurts out, good morning!  I respond to which he then says...it was you after all!  I reply confused, what do you mean?  The mystery snorer!  Embarrassed and laughing at the same time, I realize at the beginning of our adventure, we had shared a yurt and since there were so many of us in there, we were not able to figure out who had snored so loudly that night.  I did not realize I snored that loudly until that day in Mulberry and thanks to Colin, the mystery was solved...LOL!  I slowly gather my stuff, loaded up my truck, said my goodbyes to everyone and headed back home with some fantastic trail riding memories.  Long Live Long Rides!!! 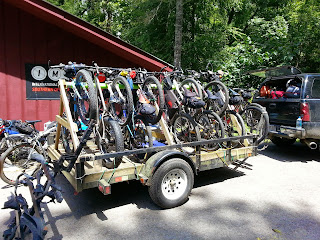