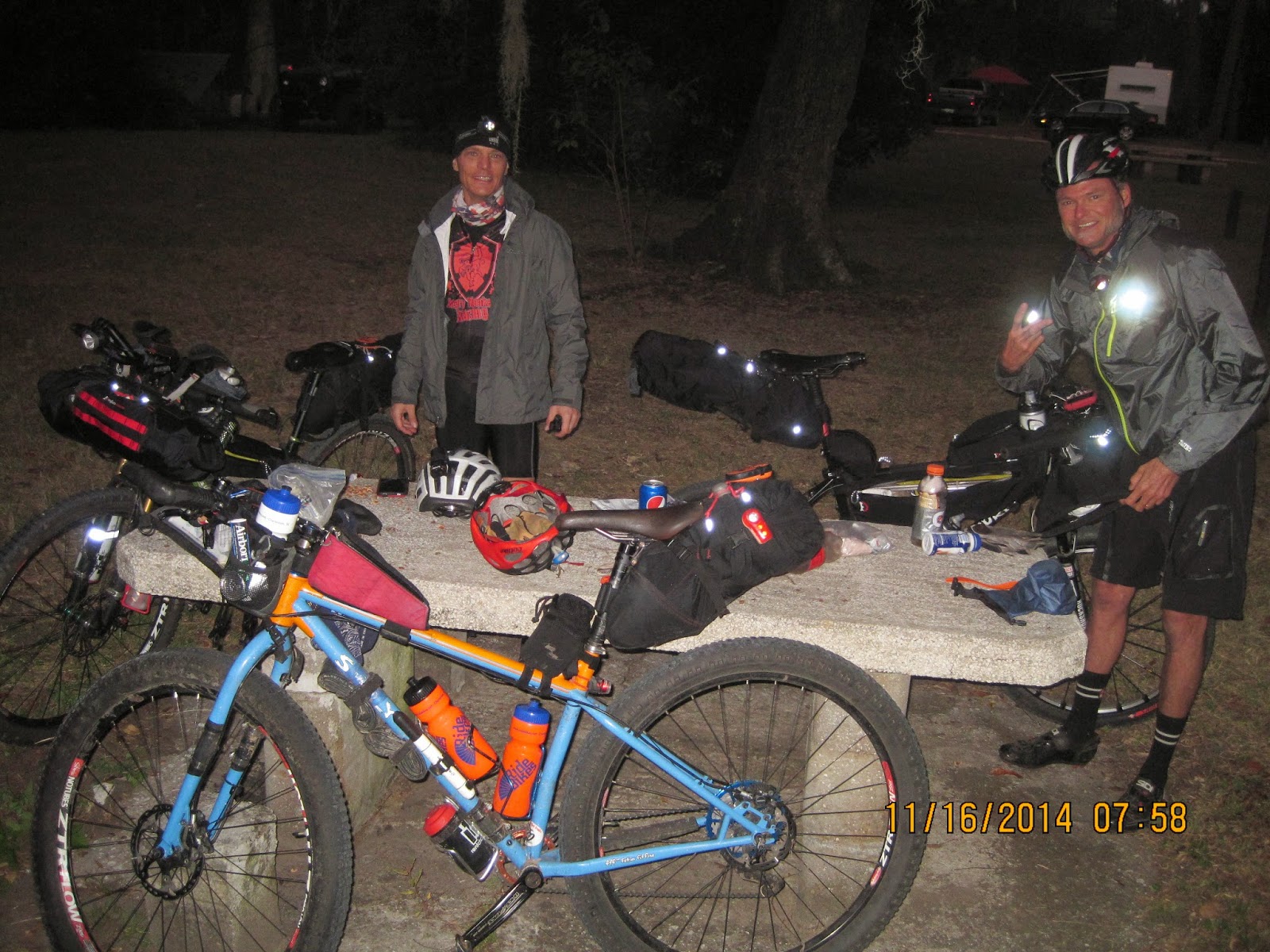 Waking up refreshed and ready to tackle the day during a long bike trip while camping in cold weather is truly a pleasant experience.  6am and I was up, breaking down my tent and sleeping gear.  If I had my cooking kit, I would have had some piping hot coffee rolling, but I neglected to bring that gear along as I had expected to pedal through the night.  By first light, I was fully packed and ready to roll.  After searching for a water pump, I gave up and we all headed out to Old 88.  At this point, I was truly happy I made the decision to stop and camp as there are not words to describe just how beautiful those woods were.  The sun was sliced up into a million points of light and delicately laced the single track with enough light to make it seem like there was a velvet carpet laid out for us to follow.  Maybe it was the caffeinated gum or the fantastic nights sleep, regardless, I was living and loving the moment I was in.  It was cool to share this experience with others as Tony and SkiJi were pedaling along this amazing stretch with me as well.  I don't exactly recall how it happened, but I kept pedaling on with a surge of renewed energy and soon dropped Tony & SkiJi.  I believe SkiJi was experiencing more problems with a bum knee and he did not want to hold up the pack, but I really don't know whether Tony was ahead or behind us...either way, I ended up at Old 88 (CP4) store alone. 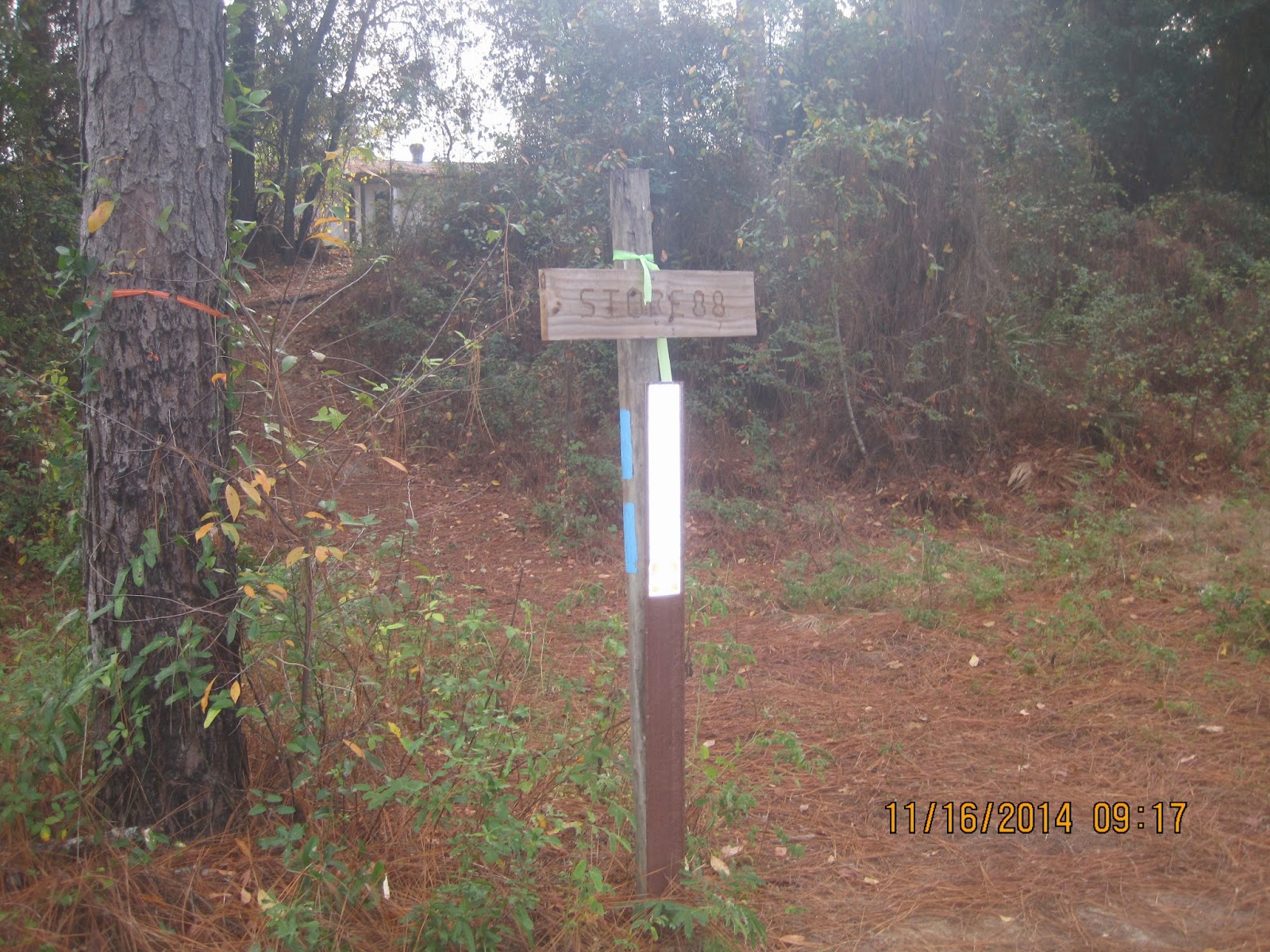 I arrived there as soon as the girl working there was opening up the door.  I purchased some fresh GPS batteries, as well as a honeybun and strawberry milk, the breakfast of champions.  The place itself looked like a general store/bar.  It also looked like there had been a party last night.  As I sat there taking my checkpoint picture, I wondered where the others were.  I finished my breakfast, enjoy the sun peeking out through the trees, and am surprised by SkiJi soft pedaling upon approach!  He takes this checkpoint photo, and we both discuss the absence of Tony who we assume to be ahead of both of us.  SkiJi shows me his makeshift knee gasket and he tells me how it feels way better now that there is a bit more support on it.  Happy to know he is riding strong, I mount my beast of a ride and roll off to the next checkpoint.   Miles of beautiful single track went by and some of it was very rough around the edges with some bushwhacking involved to find my way through.  I kept thinking about what a pain in the ass this would have been in the middle of the night with no prior knowledge of the area.  At some point along this route, I popped a spoke in my rear wheel which caused a slowdown to repair and re-tension all of my spokes.  After about 10 minutes, all was well and I was cruising along again at top speed.  Somewhere shortly after getting my stride again, I was crossing a paved road and entered yet another pristine sliver of single track and had my first encounter with a permanent resident of the area, a bear!  There up ahead of me no more than 50 feet, a huge black bear was strolling along the same single track and taking up the entire width!  This black bear was massive!  His shoulders appeared as tall as mine, not even wanting to imagine it standing on its rear legs! It seemed like he was oblivious to me and I was very happy about this fact, but one thing was for certain, I had to continue on this path, else, I would have to back pedal to the road and think of a new way around.  Then I remember Alice Thomasson mentioning something on Facebook about bells and bears and noise.  So thats when I started ringing my bike bell.  I rang the hell outta that bell!  Sure enough, that bear jumped like it had just heard a shotgun go off.  It tore off through the woods so hard and so fast, I knew if it wanted to chased me down, I would not have stood a chance in the short run.  Amazed and terrified at the amount of power and speed displayed by this animal, I backtracked to the edge of the road for about 5 minutes to allow the bear to have ample time to get good and lost.  Afterwards, I proceeded forward into the single track very wary, and tense, all the while ringing my bell.  I made it about a few more miles into the woods and started relaxing again, but also ringing my bell any time a blind corner or heavily shrouded area approached.  Fear and determination to finish the route drove me forward for the next few hours. 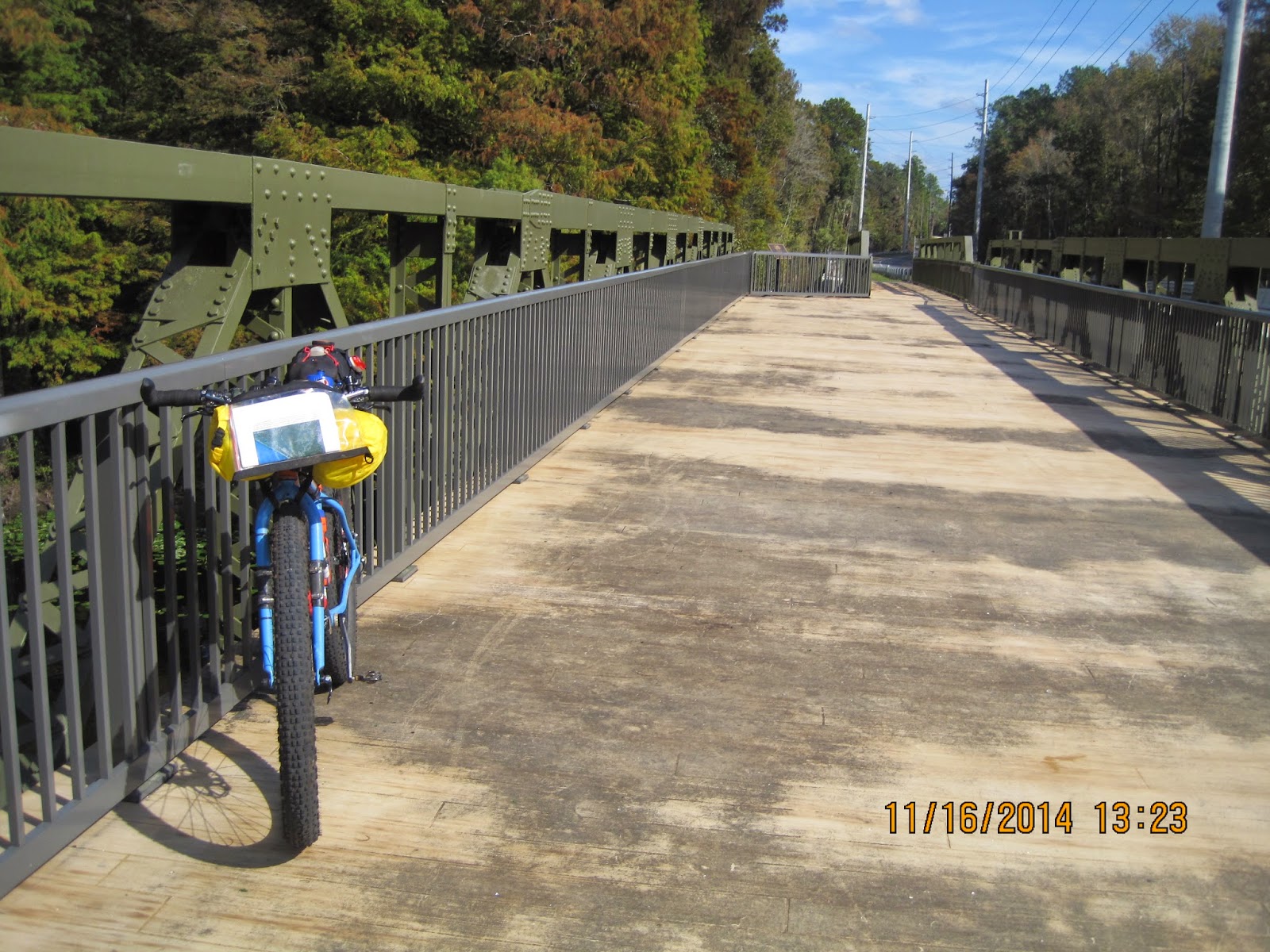 20 miles later, I was basking on the Ocklawaha bridge (CP5) taking selfies, bike leans, reading up on the bridge project and just enjoying the moment I was given appreciatively.   I then entered another fantastic well groomed section of single track, Marshall Swamp.  I really enjoyed the flow of this section and will most likely return to explore this area in the future.  For some reason, I got lost in all the moments that had happened recently and took a detour looking for a restock station on the way to Santos.  This detour took me 2 miles out of my route.  I sat there oblivious to time and space eating a reheated gas station chicken sandwich perusing my Facebook posts all cheering me on and tracking my whereabouts.  Kevin Heniford of Myrtle Beach was posting live update links quite regularly on his Facebook page for everyone to follow and it was really cool to see the support my friends displayed!  At this point, my bubble was popped when I received a text from Patrick saying something like "what the hell are you doing man?  Get back on course!  Finish this thing!"  It was a total reality check and  I needed it.  I grabbed my stuff and took off spinning away 2 more miles to make up for lost time.  As I approached the bike shop entering Santos, I came across Tony Buchman who had just pulled up.  He was eating and looked strong and ready to continue, but he urged me to wait with him for SkiJi to ensure that his knee had not stalled him entirely.  I told him I was rallying to move ahead and that I would see them again shortly, but then I stopped and listened to the voice urging me to maintain my strength and composure as well as support my new found friends.  I ended up waiting, hoping it would not be a drawn out sit, but within a few minutes, here comes SkiJi smiling all the way! 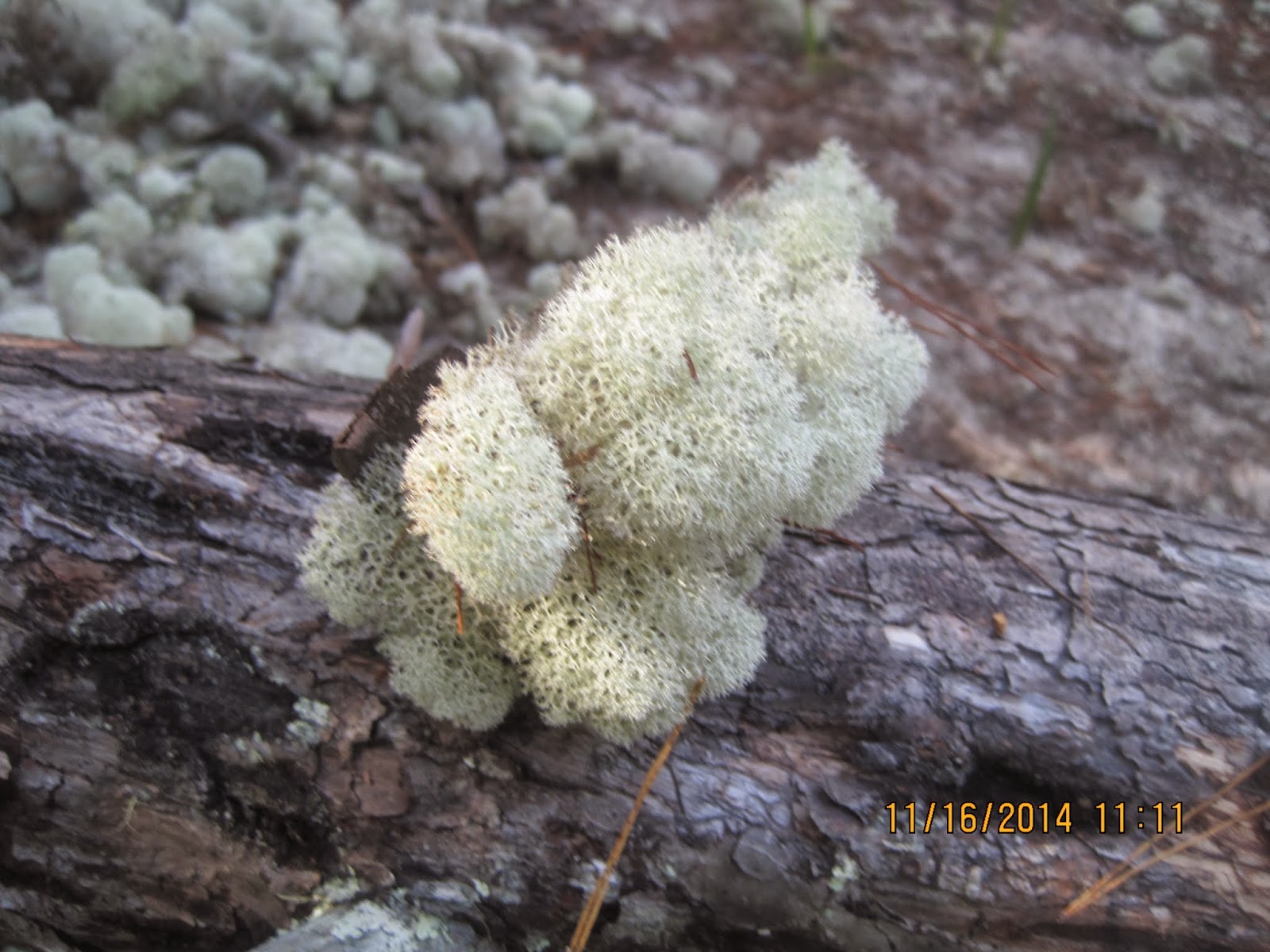 So awesome to see!  His wife was there to show support as well as ride through Santos with him too.  I was pumped that everyone was doing well and we set off into the Santos trail system at full speed.  It is an understatement to say I know this trail well.  I had this trail so memorized, I knew when to get up out of the saddle for roots, when to fold in my elbows through narrow trees as well as what lay ahead around curves.  Years of 12 hour races through some of these trails had my senses honed perfectly.  It is amazing how muscle memory is retained for certain areas.   Needless to say, I went out too hard from speeding through and suffered a major bonk as we neared land bridge.  Tony caught up and we pedaled together back and forth for the next 20 miles through all kinds of crazy single track.  Cana Diggins, Nayls, Ern & Burn, Tricycle...so much fun, so much work to keep up the pace and really enjoy these trails left me exhausted and spent.  The next few miles were relentless gravel roads alternating between loose pack gravel to knee deep sugar sand.  I hoped the Krampus would shine here, but only by maintaining a steady and strong cadence could one swim through this quagmire.  I had neither strength nor steadiness.  I walked lots, moaned and groaned knowing I was on the other side of bonksville and only a real meal would save me, not bike food sugars.  We then exited promptly to a paved road.  Not knowing if there were more gnarly trails like this close to the end, I kept my pace neutral and Tony did the same.  We pedaled through tons of small neighborhood connectors, stopped one last time at a small gas station minutes before it was to close hoping SkiJi would catch up.  Coconut juice, gatorade, chips and a red bull...not a great combination as I would find out later.  We started getting chilled, so we set off adding another lone rider to our pack and we all rolled along silently.  My energy levels were at peak, so I set the pace and we were moving along rapidly to the near end where I bonked once again and for good as the road to the Gulf was another 6 miles of paved drudgery.  I was a mere shell at this point and simply crept along unconsciously keeping pace with everyone else. Patrick joined us for the final ride down to the front wheel dip.  He knew by my face that I was crushed.  I took my final checkpoint picture, elated with the fact that I had completed yet another incredible journey in a year full of amazing rides.  As we were returning towards the car, the adrenaline surge which propelled me to the end, left my body and my head went spinning and my fluids were unloaded to the side of the trail.  I gave the thumbs up that all was ok all while losing the vile red bull and a host of other fluids I had forced into my system.  I felt momentarily better, caught back up to the others and shortly afterwards loaded up my stuff in Patrick's truck and we were off to our hotel for a well deserved shower and nights sleep.  Before leaving, we waited a few more minutes for SkiJi to roll through as Tony had confirmation that he was enroute.  He rolled past us to the 6 mile final grind as we cheered him on!  What a crazy, fun, insane, incredible experience!   Can't wait till next year! 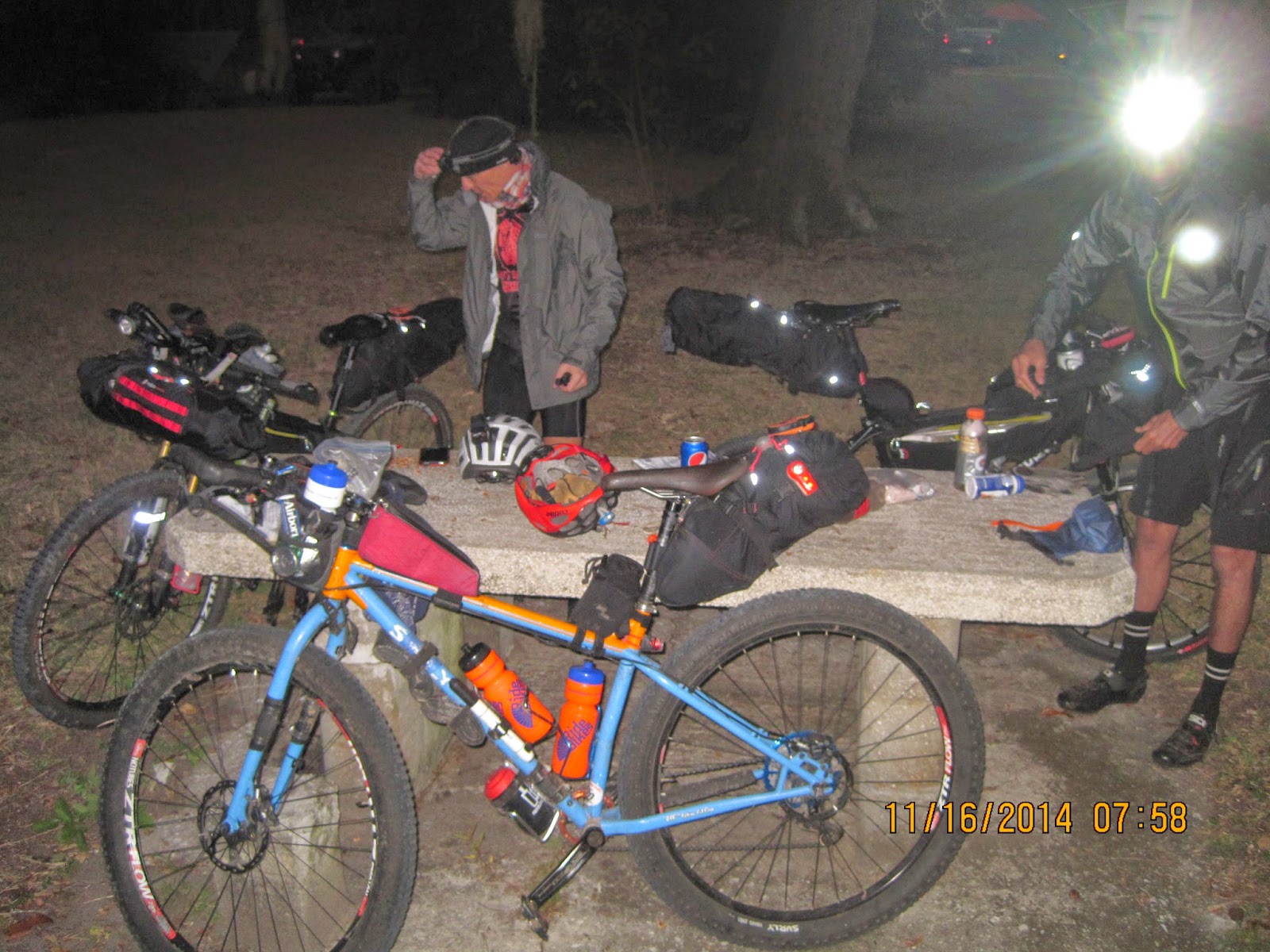 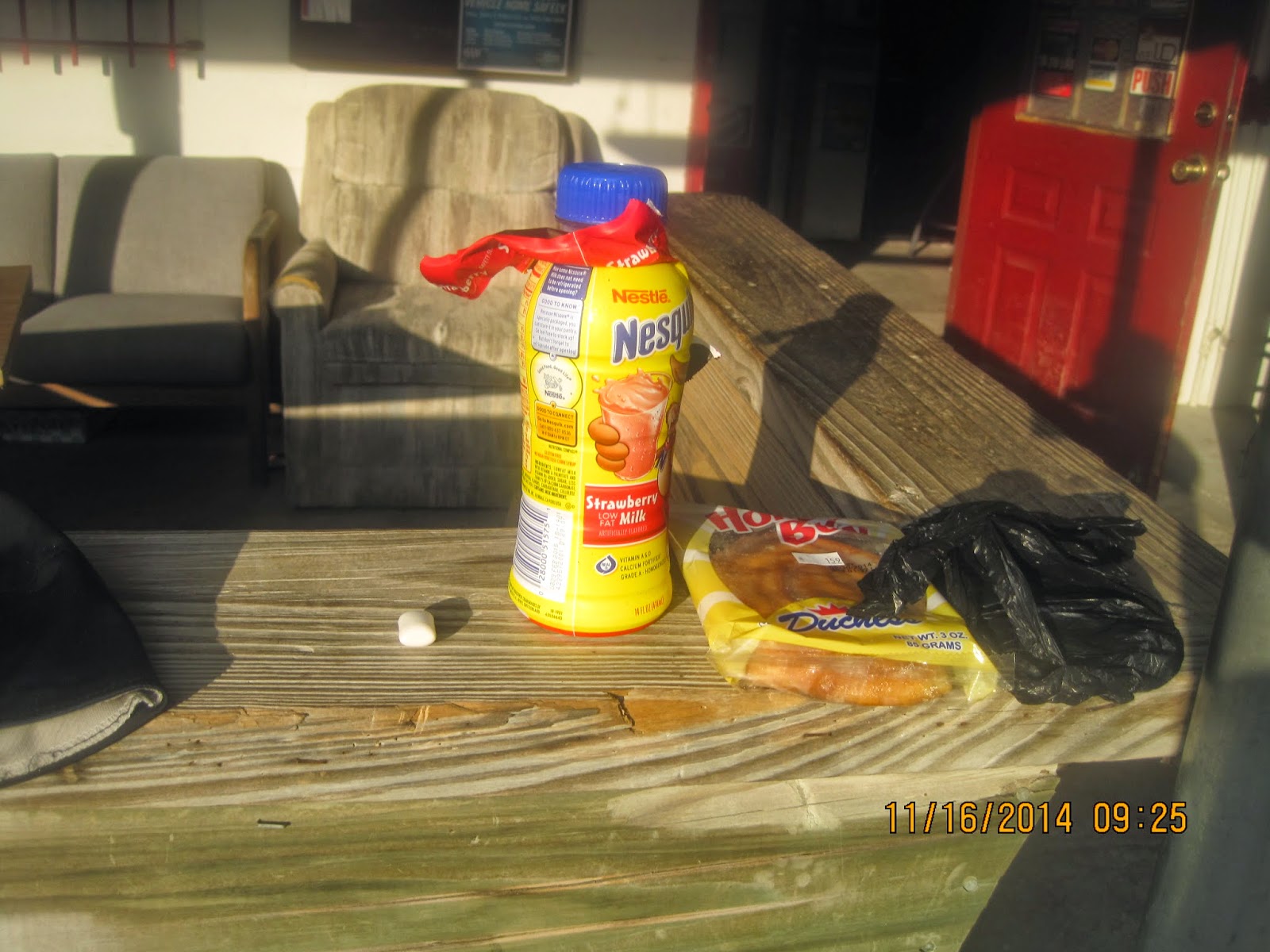 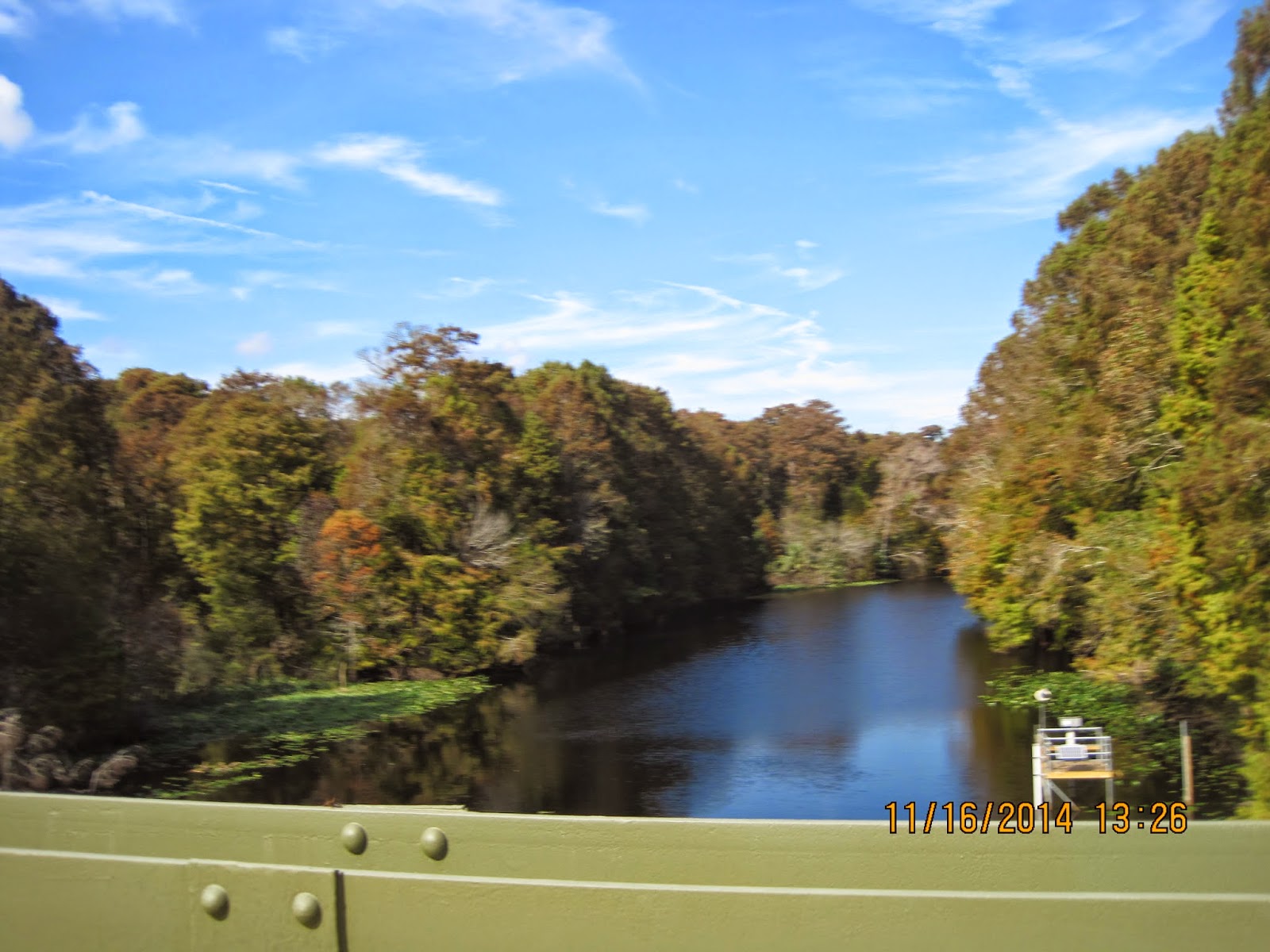 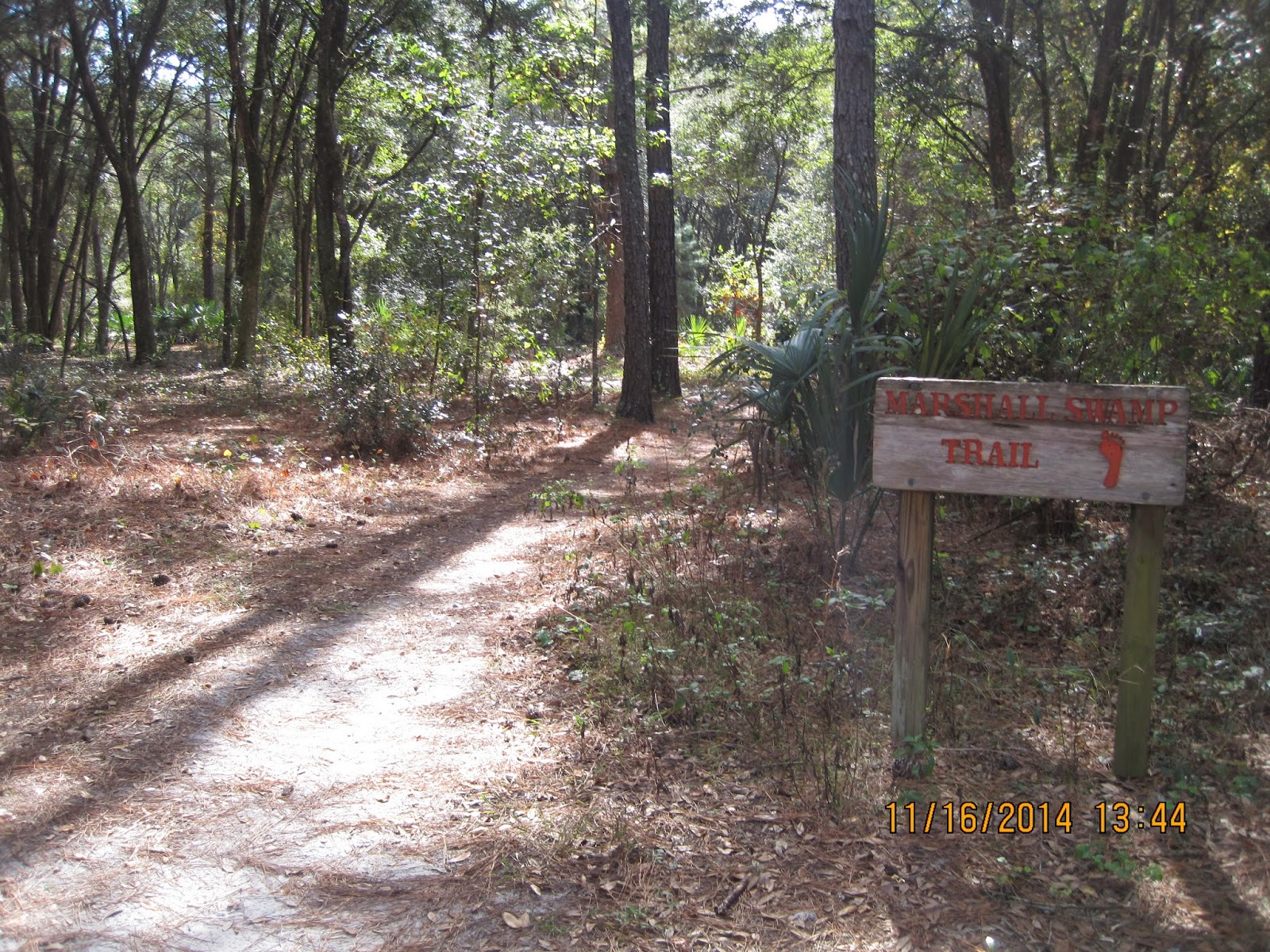 Posted by LowCountry Joe at 3:32 PM