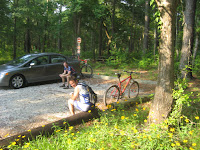 Singles Night #2 ...ahh yes...another memorable race meet...
I had ridden my road bike for about 2.5 hours earlier around noon to make sure all was in working order since I have the Tour de Cure century coming up this Saturday and I wanted to really put in a decent ride for that event. With this said, you can probably already tell I was not entirely prepared for the race that evening. I made my way out to the race with SS changes consisting of taller gearing, 36x17, and the Reba Race back on to get used to her since this is the fork I have selected for the Cowbell Challenge on Jun 20th. I was hoping the taller gearing would really let me put a gap between my opponents when I reached the flats, but little did I know nature had just thrown a monkey wrench into things. An hour or so before arriving to Marrington, it had rained/downpoured in that general area. This means the trail was not going to hook-up at all! This also meant my taller gearing was going to grind my legs to a pulp with all the stopping and starting I would now be doing in every approached corner...things were definitely not going my way this week. So, once again, I changed my strategy on-the-fly and decided to just ride a steady even pace.
Did I mention this weeks line-up of heavy hitters? Yeah, we had a great race in store today! Last weeks winner, Joe Pelton from Columbia was there to defend his title, Justin Fisher was present and looking hungry for a win...Brad Phillips had somehow managed to cobble his SingleSpeed back together to try and reclaim some of his dignity, Robby Bennett had his machine tuned and ready, Sean Mehaffey was back for more with some comtemplation of fully converting to SS...
Seems like I was not the only one looking for an edge on speed. These spy photos taken of my competitors rides show they are all running taller gears in hopes of keeping up an exceptional pace. 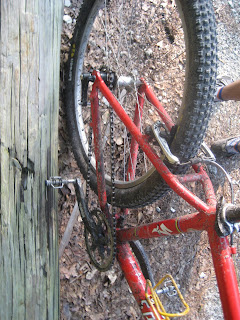 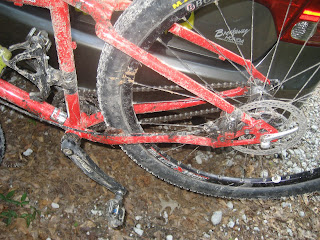 Some others were employing alternative ways to go faster such as wasp venom injection taken 10 minutes before the start, no I would not count this as a "technical violation" just yet....would we? Maybe we may just need to have everyone "tested" after finishing here as well? 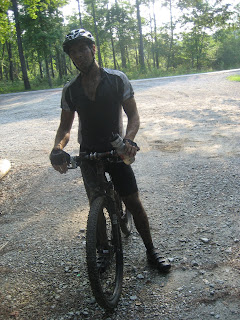 Racetime:
So we decide the course, clockwise, roll out in a nice orderly calm fashion and decide to do a gradual rolling start...We all unconciously sort each other out and then like he was reading my mind, Robby Bennett blasts out of nowhere from the back of the pack and mixes everything up which really makes the racehorses twitchy...sensing this edginess, I jump out of line and rocket up behind Robby laughing all the way since there is no way in hell I am going to go fast today, especially with the mud already starting to fly everywhere. MY first thought as we enter the singletrack is: BE CAREFUL, Do NOT crash. Of Course Robby was on a mission and spills almost immediately upon touching the first bridge which rolls like ice because of the wetness. I slow to a stop see him laughing and not in pain, so I unclip and run-launch around him. I feel others do the same behind me and I suspect the race is now officially on! Off I tear like a rabbit in pursuit only to realize I do not have a bit of traction. Upon Approaching the first turn I goto lightly bank and find myself still sliding forwards. I run up and into the bushes and whiplash out of the turn hangning onto the lead by inches...Behind me I hear Justin mutter something about staying on the course and then he asks me if I am already blown up from starting out too strong. I cannot think of a reply since I am just trying to avoid slamming facedown into the mud. I try a little harder to separate myself from the racehorses to my backside, but I feel it is a downward spiral today, so I quickly swallow my pride and yield. Immediately almost instinctively, Justin takes the opening, shortly followed by Joe and then finally Brad. I feel the pressure let off but the trail is still nowhere near rideable. I try like mad to trail them, but slide out of a corner and almost lose it. I trim the speed and find my pace. Heartrate was not a pretty sight. Handling was out the window, and the legs were on strike. Somewhere in my head I hear the voice, do not stop pedaling, no matter what. So I continue pedaling, trying to figure out where I would make up lost time. After a few moments, I gather steam and approach a good rolling boil of about 18-19mph, then immediately go skidding to a halt because I missed my turn to Fosters Creek. Damn! That sucked. Turning around I feel my legs shouting at me for making them restart...then off through the valley of the dead I went...Foster's was a blur...a slow painstaking blur of mud, slippery roots, heavy breathing, sweating and lots of stand-up pedaling. Wrong gear choice for the mud...Once I finally made it, I was moving fast! I had found my legs and I was trying some nice sliding manuevers around the turns in the Amazon. I pulled most of em, and never ended up crashing, miraculously. Upon approach to Mary's Landing, I felt my system start to fade again and went back to pace mode...never stopping. I passed Page at this point and then shortly after this Robby Bennett who had also missed Foster's Creek or some turn in it and decided to just lap out the course...I also saw a glimpse of Brad working really hard to get out of the singletrack. This was the inspiration I needed to keep moving strong. I started churning noticing him up ahead by about 1-2 minutes in the crossings. Yeah, my strategy was actually working! I worked hard up to Mary's Landing and actually had Brad fully in my sights then. I rang my bell in celebration, and yelled out that I was coming for him and the hunt was on! No sooner had I said that when I slipped on a root in the middle of the technical section and gently smacked the tenders onto the stempost. All the gas was momentarily gone, but the injury was light as I had been able to catch myself for the most part. Upon getting my momentum up again, I realize Brad is gone and I jam out of the technicals with my sole purpose to hunt him down. I entered the red section and see him one last time whereupon I unwillingly go back into pace mode and finish out my lap running on nothing but fumes. Surprisingly, I was right behind Joe and Brad the entire time. Justin had finished a few minutes before them and was also still spinning around...Awesome Race! I had not won the race, but my strategy really helped me finish in a good time. I was satisfied with my performance. Beer made it's appearance at this meet and cheers were shared by all... 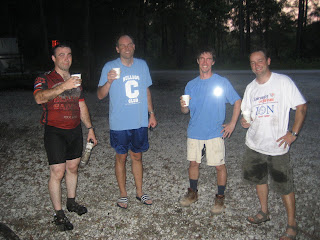