So I decided to knock out 3.5 birds with one bike trip by rolling up to Myrtle Beachie for the first weekend in August.  My mother's birthday was on August 1st, so I arrived early that evening and went out to eat at El Cerro Grande.  Much mexican food was ingested and off we headed to my moms house where I would stay for the night.

The next day, I decided get in an early ride, but not before eating a nice breakfast with the parents.  Afterwards, I kitted up, pulled out the cross bike and headed out to explore Coastal Myrtle Beach.  The weather was murky and threatening to bare down with massive amounts of precipitation, so I carried along my rain jacket.  The air was also very warm, so the jacket tucked under my jersey was added heat against my body which made me want it to rain in order to cool things down.  My first destination was The Myrtle Beach Bike Fix.  I needed a new helmet since the one I was wearing had been cracked for a few weeks since an incident during a group ride sent me flying over the handlebars onto the dirt landing helmet first.  A new Catlike helmet was purchased, recommendations on where to ride were given and I was on my way.  I pedaled up the boulevard from the south end near Springmaid Pier up to 82nd ave.  The traffic at this time was light and my speed was constant.  The wind was blowing and I was having a great time.  I then connected up and across through a very hairy and tricky connector towards North Myrtle Beach.  Now the fun began.  I knew my way around here by car, but never had the opportunity to go through all the coastal niches via bike, so that was my challenge.  I rode onwards towards the coast near the Galleria at Kroger's only to find out the border roads are segmented by many different "hotel villages".  This made for a tricky up and around trek, but I had most of the early day, so I continued on.  Out I popped onto Hwy 17 again near Briarcliff.  An established mini-sidewalk system existed to allow the shoppers foot access to the malls, so I used it to shuttle my way up to the horseshoe section of North Myrtle Beach.  On I went into the Atlantic Beach section until I found out this section was also partitioned from other areas of the boulevard..hmm... 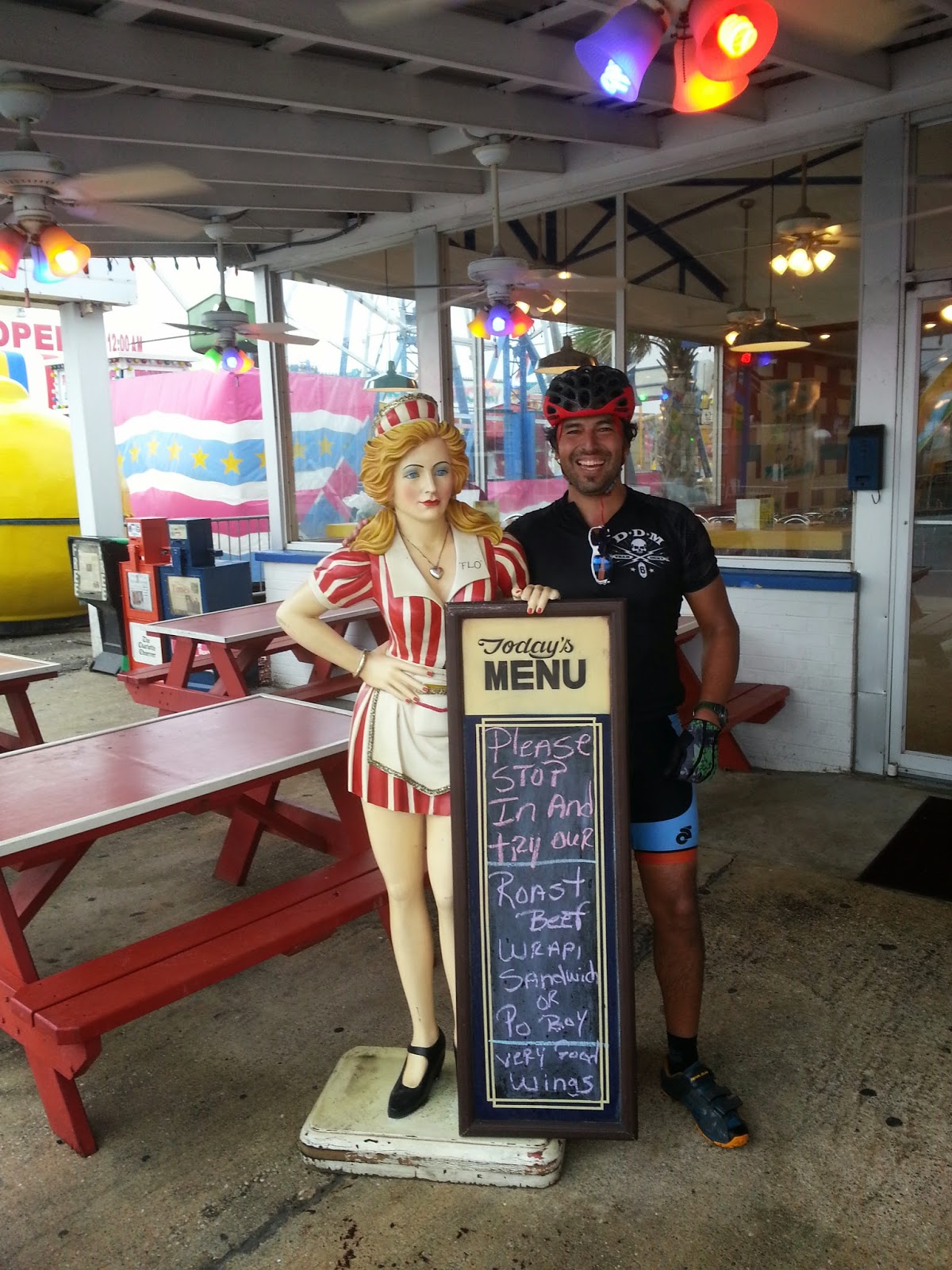 Fortunately, there is a sliver of a trail which allowed me to squeeze over to the boulevard where I continued my trip.  I pedaled onwards at the edge of an angry roaring ocean warning me of the impending downpour.  I realized the ocean conditions just as quickly as the sky opened up and dropped massive amounts of rain on me while on my ride.  It felt so good I continued onwards.  The rain cooled things off so much that my overall speed increased and my feeling of wellness balanced out.  I pedaled all the way up to the northern most point of the Windy Hill area where I proceeded to double back to my parent's house.  The ride back was just as complicated, but enjoyable nonetheless as I now knew where to pop in and out of.  As I approached the south end of the boulevard, the traffic had multiplied exponentially, so I started to weave my way thru miles and miles of standstill tourist traffic.  So many kids in cars stuck in traffic looking at other kids in cars.  Ahh, wasted youth.  As I rolled back, I was paparazzi attacked by the Kevin and Stacy Heniford who had been tracking my Garmin Connect Dot locator all the way up to North Myrtle Beach and back...It turns out they were headed back home and simply wanted to stop and catch up with me.  It's cool how technology keeps friends together. 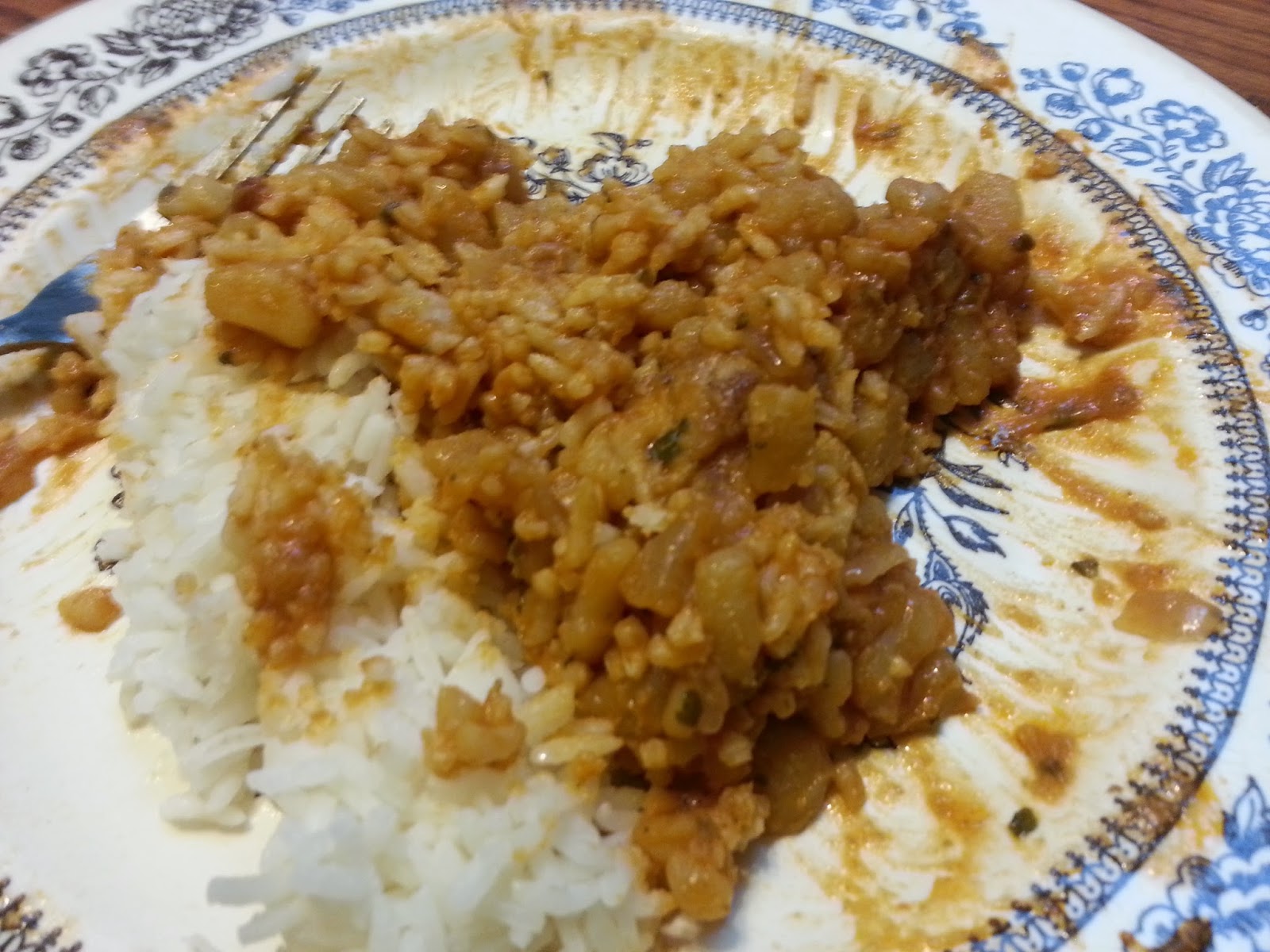 65 miles later, I got home and discovered my father making an incredible meal for a late lunch!  What a treat!  I jumped in the shower, cleaned up, changed clothes for the drag race and then I quickly scarfed down 2 massive plates worth of good Peruvian home cooking!  So after a quick recovery nap, I jumped into my truck and headed over to the annual Myrtle Beach Drag Race and Swap meet.  All the usual suspects were there already looking for parts or showing off their drag race steeds.  The rain as it had been all day was hanging heavy and threatening to make this event a very wet one indeed.  From the turnout, it seemed no one was scared off because of the rain.  I laid out my massive amount of extra bike parts to sell on a nearby table hoping to get rid of it all today.  I then turned my attention to my bike which I was going to drag race.  My legs were tight from my earlier ride, but a quick spin helped shake out the cobwebs.  I proceeded lining up and just like that we were racing!  Two at a time, racers went up and tested each other until only two racers were left, James Cooper and I. 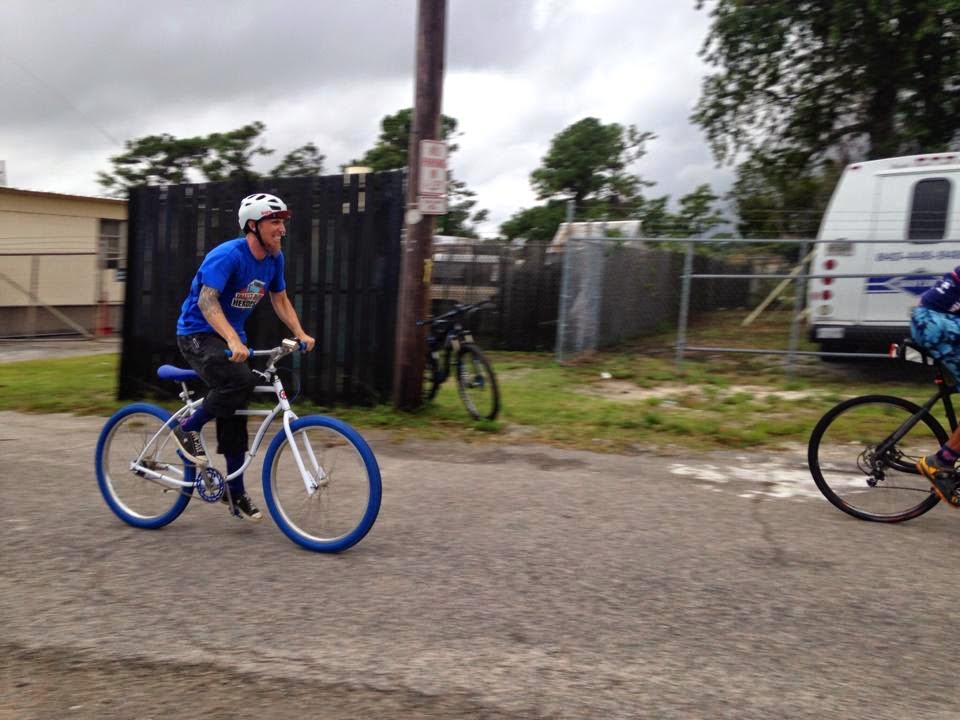 Oh this was going to be good.  Go! Off we sped, I started out simply heckling James as we raced down the stretch only to find out his bike picked up speed quickest in the 3rd stretch!  He started to roar ahead as I scrambled to maintain my composure and proceed with my attack.  James shook his head at me as I sped away from him.  I whizzed thru with a win as clearly none of the stronger guys had managed to show up yet, so the race was most definitely unbalanced.  The Slow Mo race was definitely my favorite as it relied on balance and handling skills.  I crisscrossed my way across from rider to rider, cutting them off, forcing them to lose their balance and touch the ground.  It was so much fun!  Earlier in the competition, I had cut off another competitor with an illegal fakie move and the judges stripped me of my win in this category, but that was ok as I had won enough to qualify for free beer!  The best thing about this event is the laid-back feel and simply checking out what everyone is riding nowadays.  Selling bike parts and leaving with cash in hand is always a great feeling as well.

Afterwards, everyone got ready for the first ever Myrtle Beach Alley Cat Race which would send racers all over the Myrtle Beach area based on clues. This race was a blast!  We started from Beach Bikes after having to run around the building to pick up our cue sheets.  After running back around, I grab my bike and proceed to huddle up in a corner to hash out the best route through the city.  Once again, not knowing all the right places makes it hard for one to really do good in events such as these.  I hashed out that the furthest point away would be the market commons area where the MB Bicycle Fix was located, so I took off like a rocket.  I thought I was the only one going this way since I first saw a number of riders scooting out towards Celebrity Square, but I then heard a familiar sound to me....a mountain bike tire hum.  Just when I thought I was alone, here comes David Hall flying along and passing me in an instant.  I quickly jumped on his wheel and we fell into a furious draft speed train.  It was a pretty cool feeling speeding through the back streets of Myrtle Beach.  We picked up some more riders and soon, Enoel and a few others joined the train to Market Commons.  Dave picked up the pace upon reaching Kings Hwy and soon, the group broke into several pieces.  I went off the back as I had nothing really left in the tank after my longer ride earlier that day as well as the drag race fun.  So I sped along to the first checkpoint, took my photo of the store, and sped off to what I assumed was the next checkpoint.  I sped back down to Ocean Blvd and stumbled through then next few checkpoints as I had a little difficulty finding them due to my lack of knowledge of the total area.  I did, however, remember where the underground tunnel was at Sea Mist! Onwards we sped down Ocean Blvd, riders going every which way!  I found myself drafting a few vehicles at speeds around 30-mph..it was awesome.  Traffic was gridlocked nearing Ripley's so lane splitting did occur and it was hectic.  I had my eyes open wide and both hands ready on the brakes as I flew through the middle of the lanes...alley cat madness!  After reaching a checkpoint at the top of the Pavilion Parking garage, I made the sad discovery that I had missed a checkpoint 2 miles back at Market Commons.  After some serious reassessment, I decided I could not go back in a realistic time and get the checkpoint.  My race was over.  Some of the reason for the loss had to do with the fact that my cue sheet list deteriorated way back after reaching checkpoint 2.  The night's moisture had eaten into the eco-friendly printer paper and turned it back into a mash of wood pulp.  I had since been feeding off of Enoel's list since he had his in a ziplock bag, which was still filling with moisture every time we opened it.  We went around and picked up all the rest of the checkpoints and chalked it up to having a great night riding bikes through Myrtle Beach.  We ended up at a pretty cool bar named Atlas..they had great beer and treated us very, very nice.  Had an awesome time chatting with all my friends.. Overall, it was a great night, and I totally look forward to next year's event. 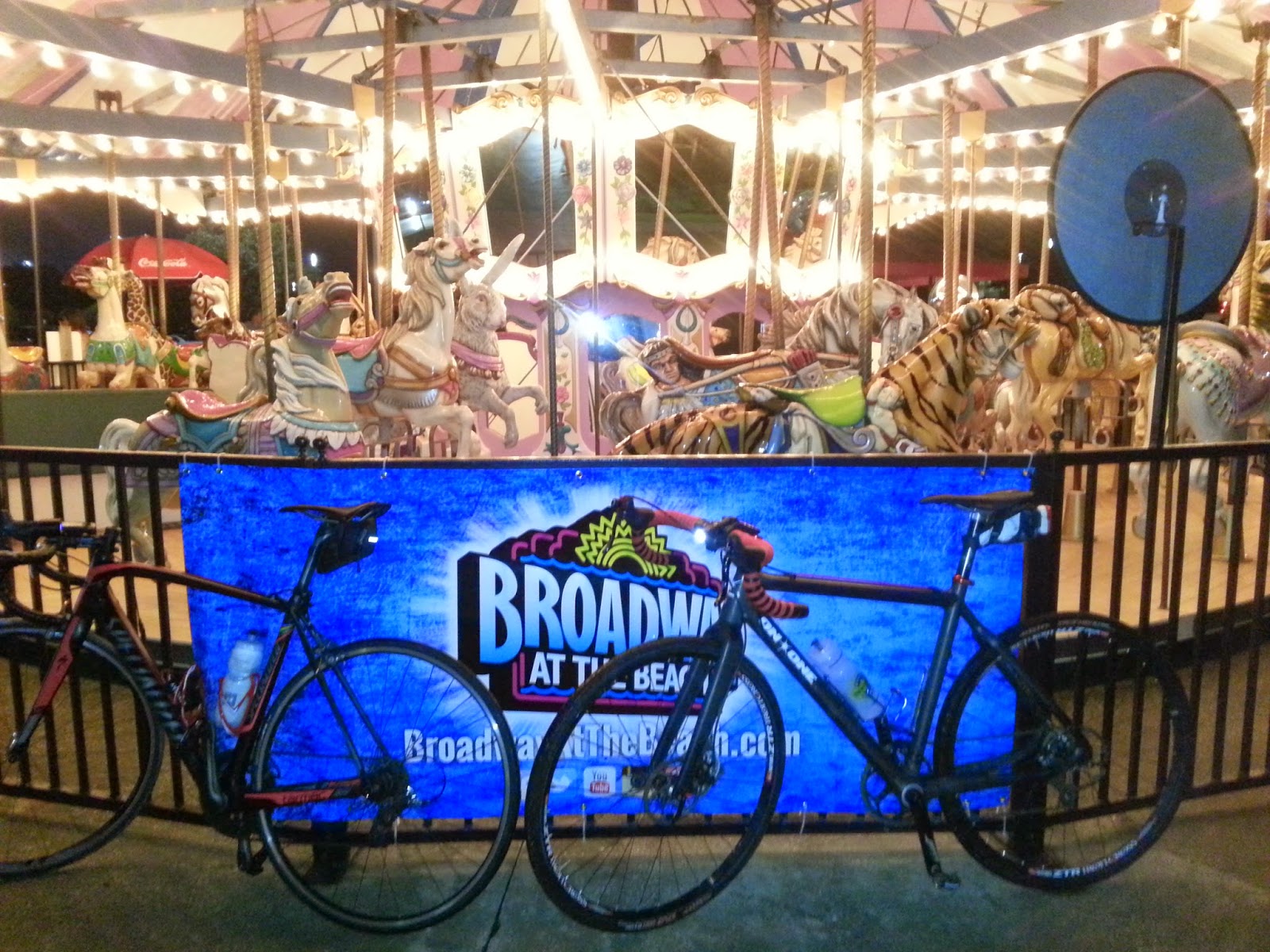 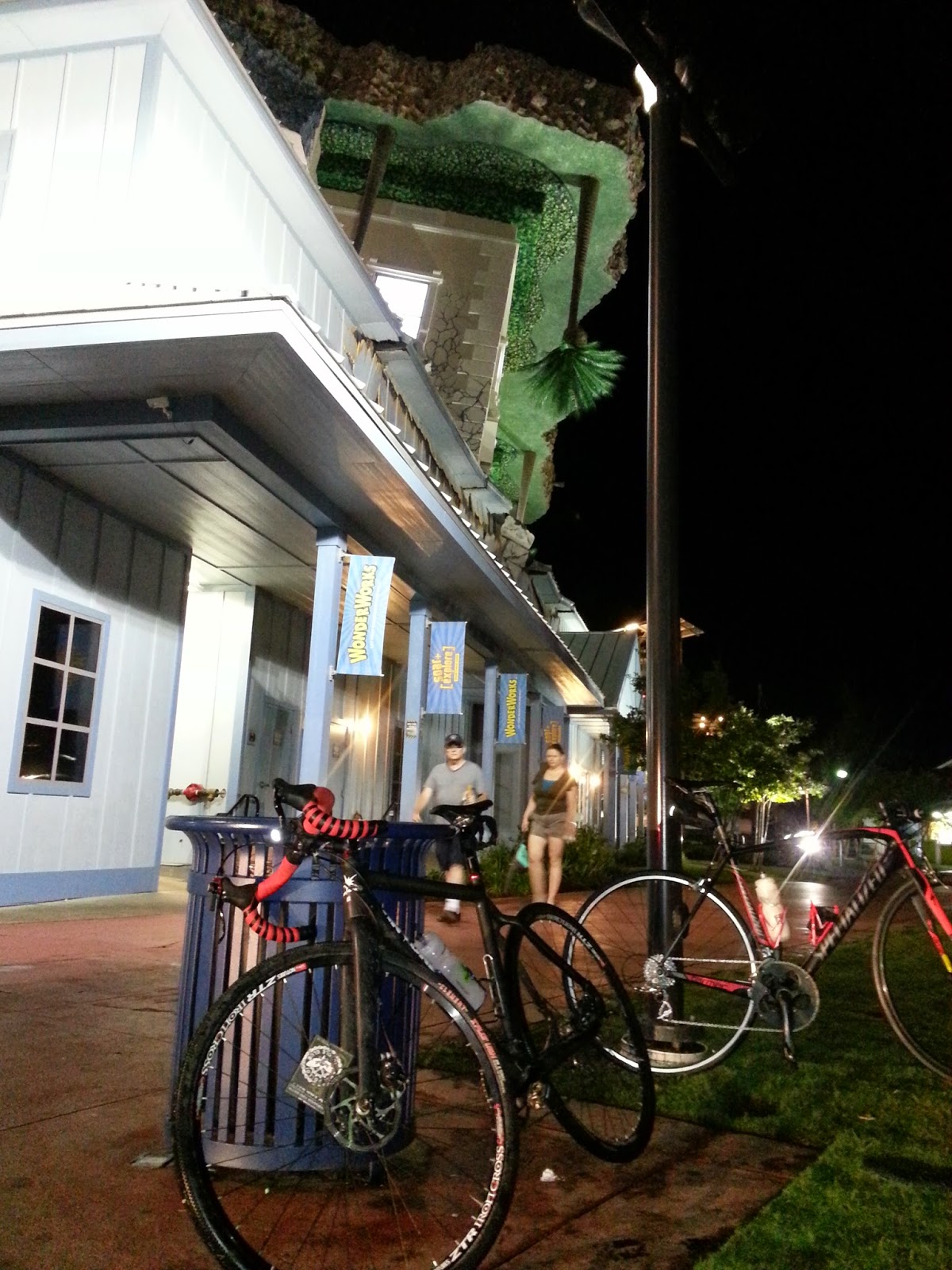 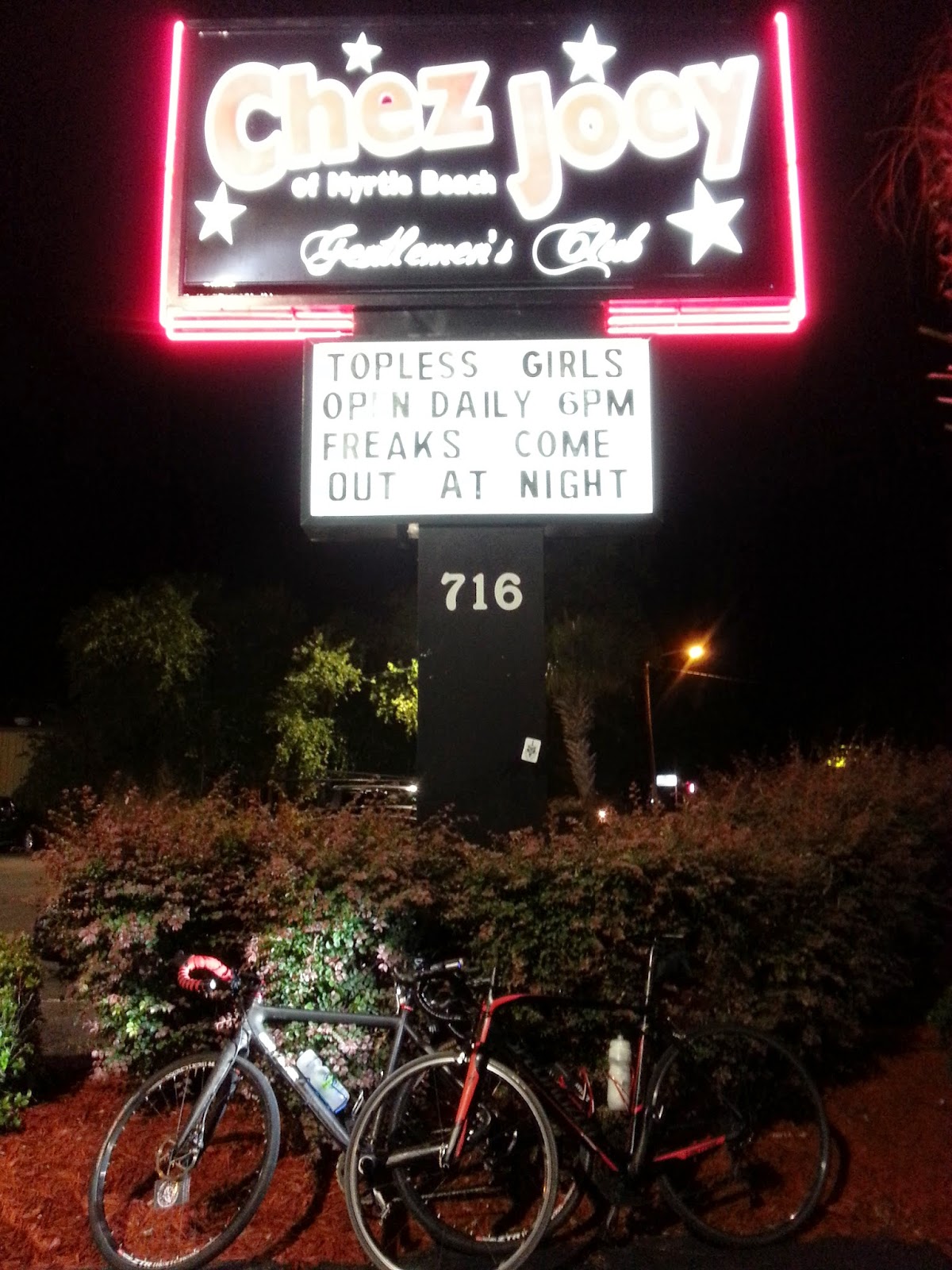 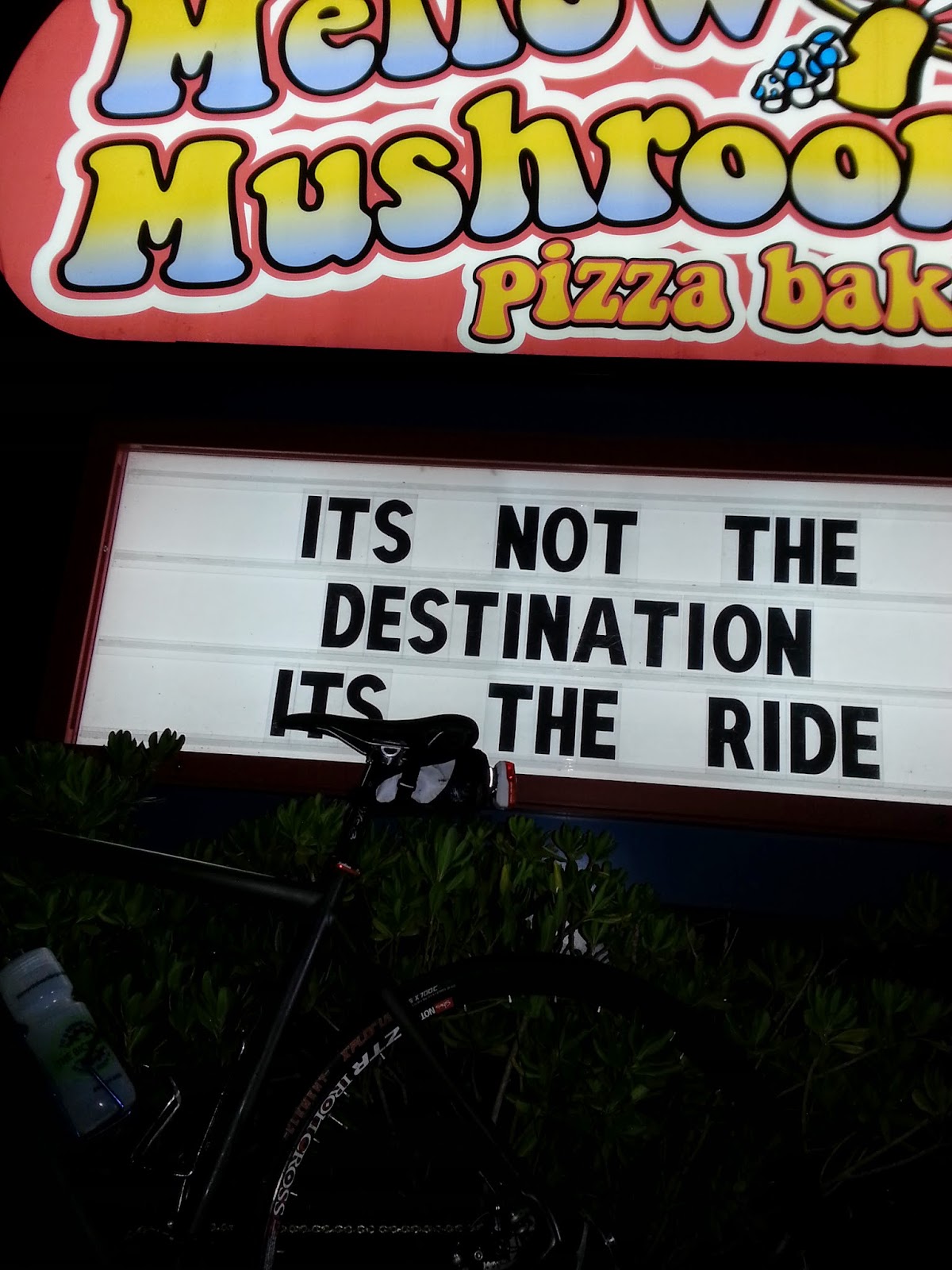 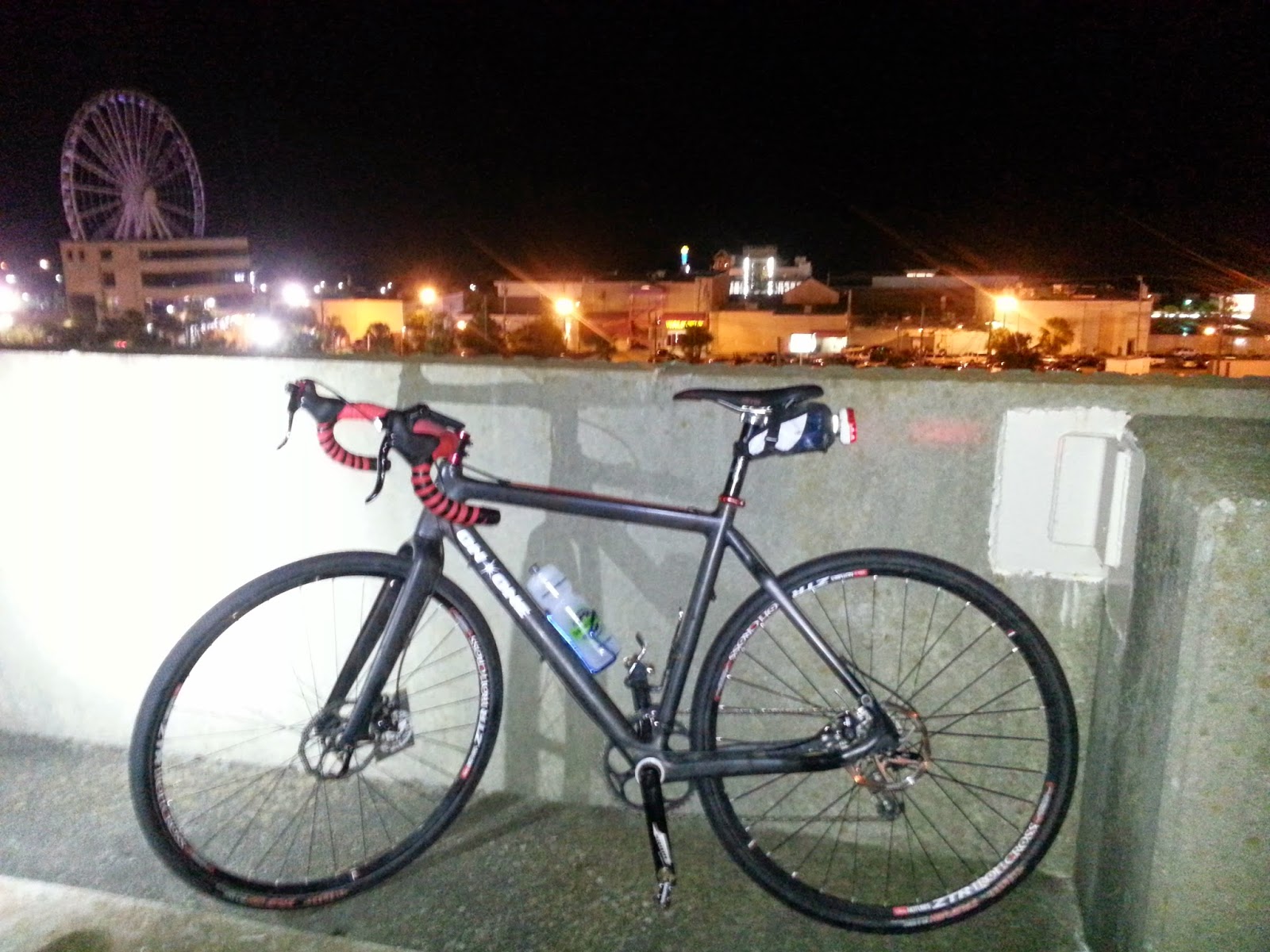 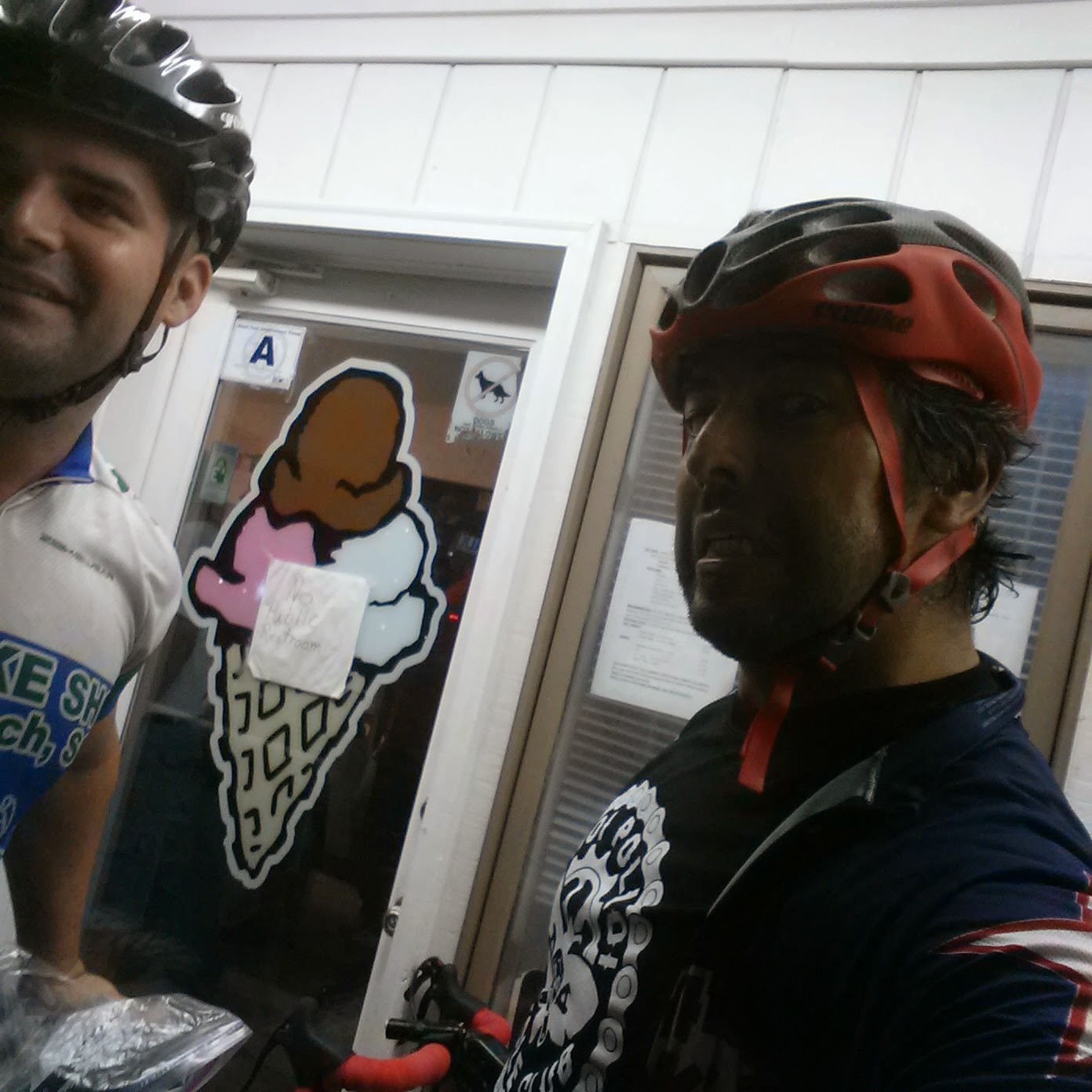 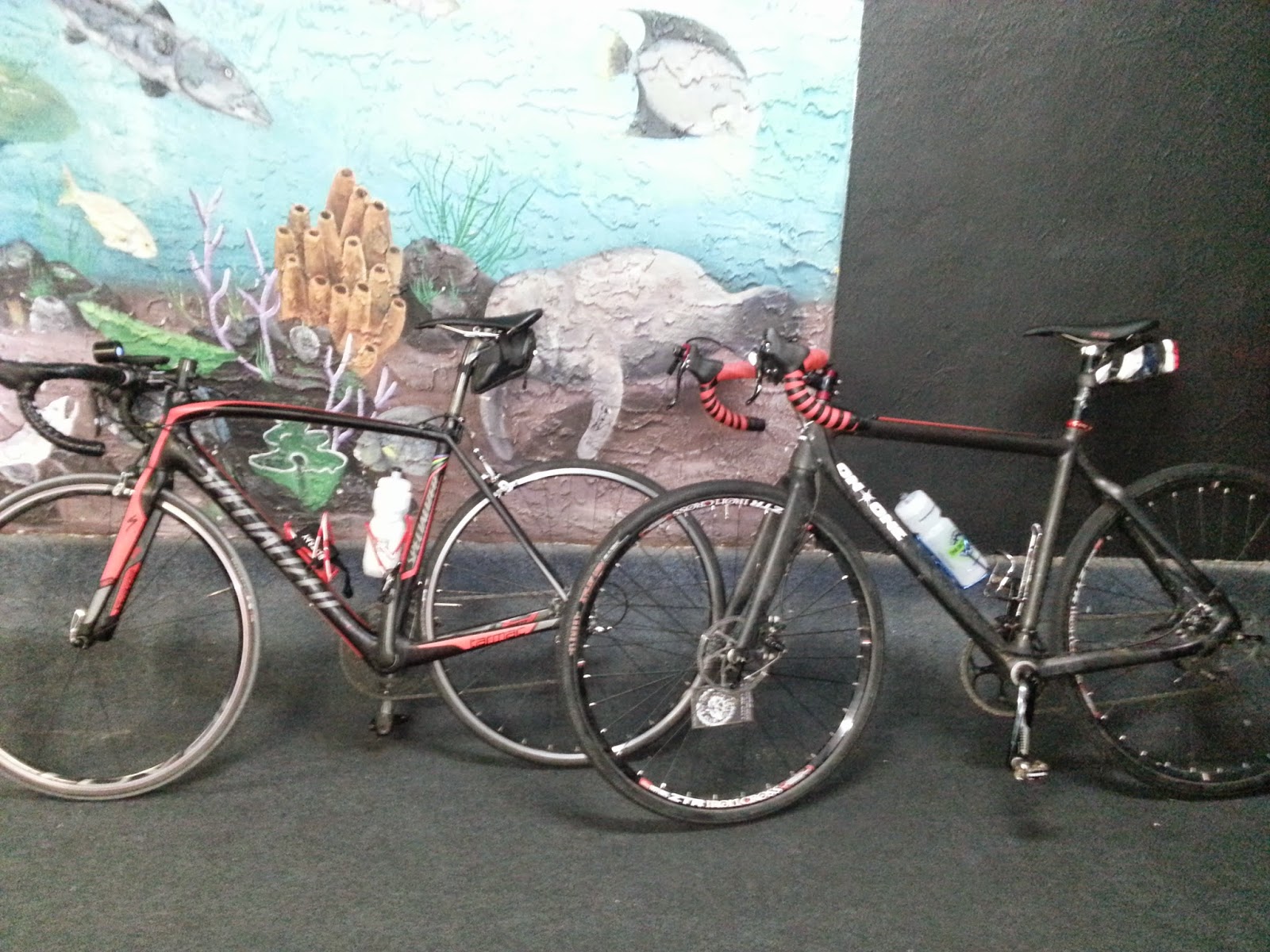 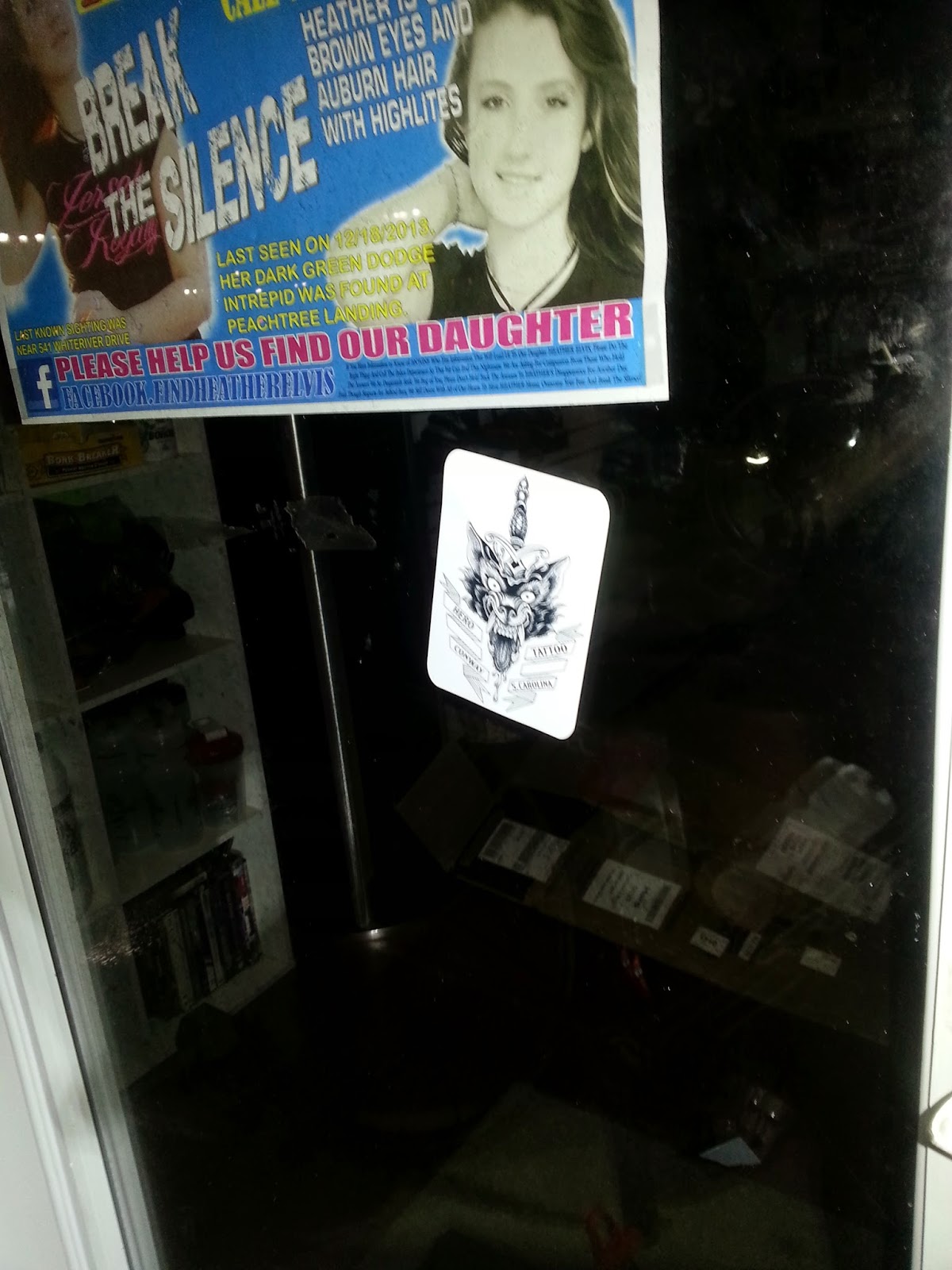 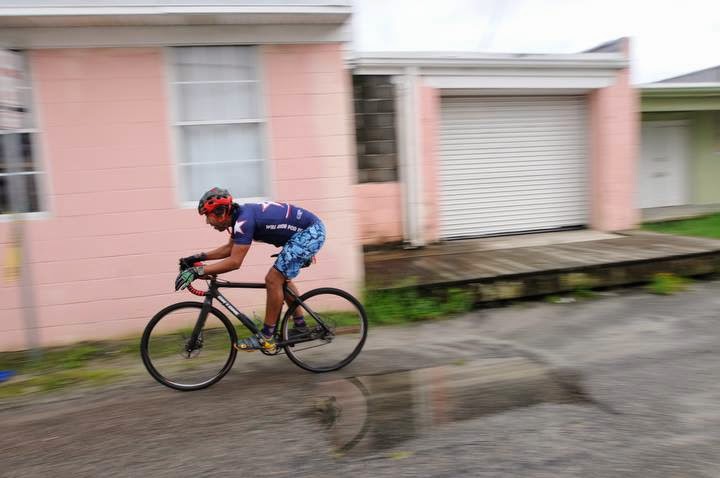 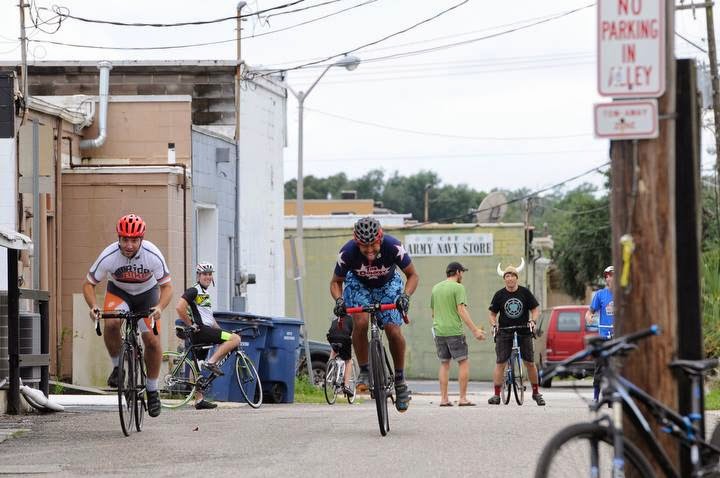 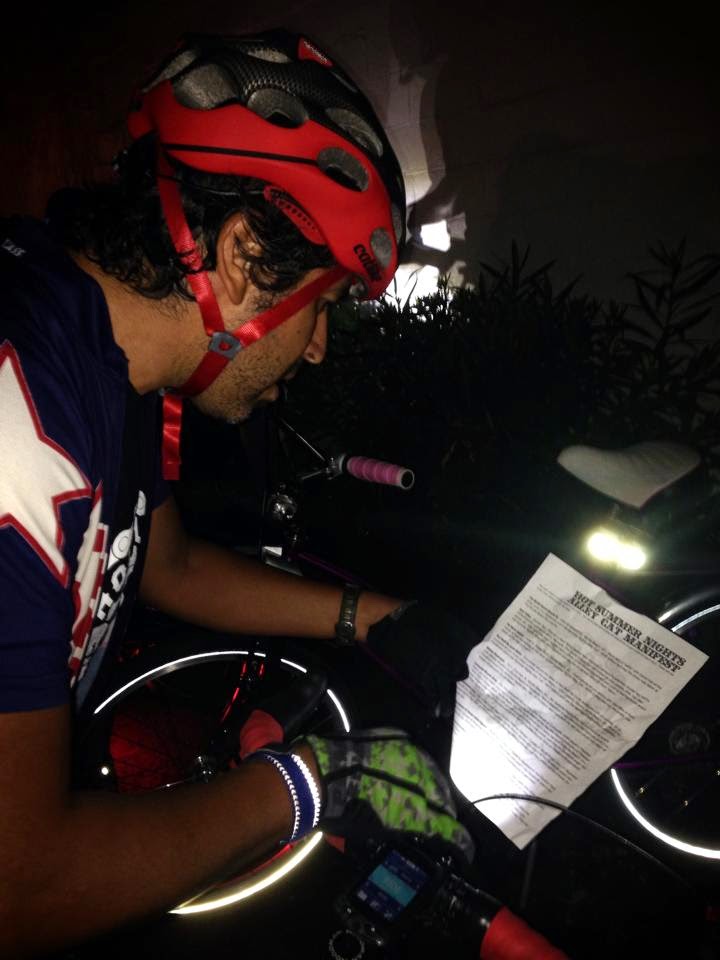 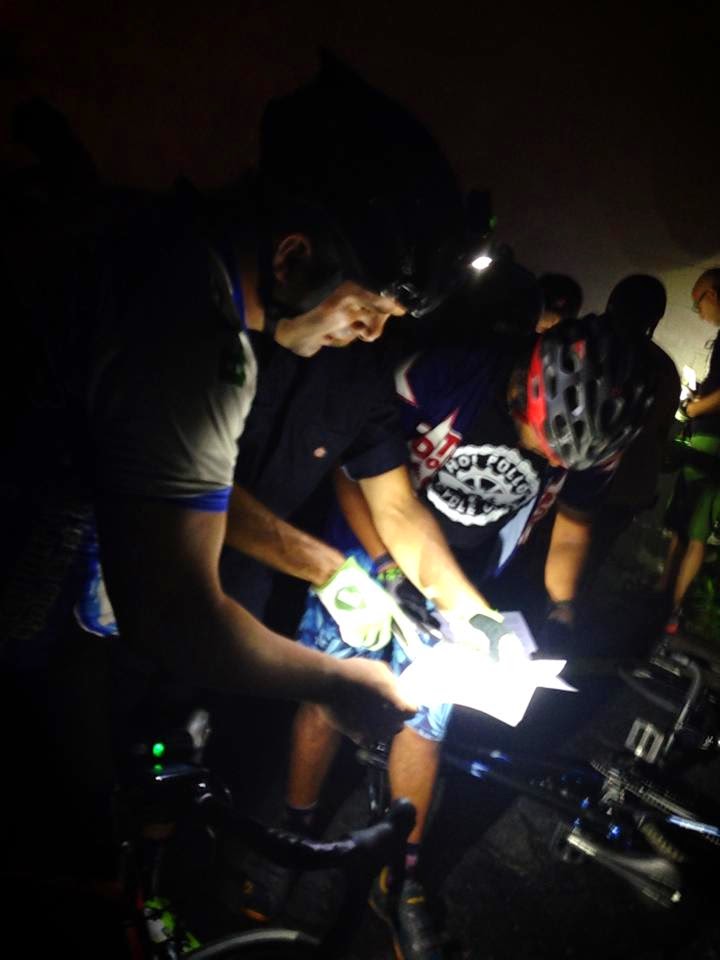 Posted by LowCountry Joe at 2:03 PM