TNGA: Preparing for the best of times, the worst of times and everything in-between...

The TNGA (Trans North GeorgiA) is a 350 mile mountain bike route through the mountains of North Georgia on trails, forest roads and paved roads featuring challenging terrain, beautiful scenery and over 56000 feet of climbing.  The Trans North Georgia Mountain Bike Adventure is a self-supported ride along the length of the route. Riders are welcome to ride the route as an ITT(individual time trial) or as part of the annual event.  The 2014 event starts at 8AM on August 23rd and registration is limited to 75 participants. There is NO registration fee. The field starts at the South Carolina Border on Highway 28, east of Clayton Georgia, heads west and has nearly 9 days to follow the route to the Alabama border on Highway 20, west of Rome, Georgia...

That being said, TNGA is a tough ride across Georgia on a mountain bike.  One which I was talked into signing up for at the suggestion of a friend of mine, Mark Sackett, who told me this was a ride I would never forget.  He was right, I will never ever forget TNGA.  Bikepacking in itself is something that is a natural progression of my love for cycling as well as my interest in camping and minimal approaches to all of the aforementioned.  It involves a lot of time thinking about and reevaluating your chosen equipment based on where you are going to ride and how far and how long you are going to be gone.  Earlier in the year, I had planned on riding in the Huaracan 300  and I had missed out on it due to NAHBS.  I didn't realize at the time how important that ride would have been to preparing for TNGA.  Long distance bike races/rides are no joke and if I had known just how much a ride like the Huaracan would have prepared me for TNGA, I would have definitely gone out of my way to ride it.  Since I registered to late for TNGA, I was not on the "grand depart" list, so I wasn't worried about the "commitment" factor yet, but I did mention I was going to ITT it and I wanted to stick to that notion.  So in my mind, TNGA was a go...

So that being said, my race preparation for the TNGA was based primarily on how I had tackled Dirty Kanza.  Dirty Kanza was a gravel race out in the middle of Kansas I had completed at the end of May.  While Dirty Kanza was a very tough gravel race, it was not nearly the kind of race to prepare me for the insane amount of climbing I did in Georgia.  Kanza was a supported race with SAG stops every 50 miles.  TNGA was fully self supported across 350 miles.  That will make up another blog post..this is about preparation.  So in my mind, all I was spinning was which bike to use?  How to setup my bike?  What gear to bring?  How much food?  How to handle water?  What the hell am I thinking?  Why am I not putting in 200 mile rides every day right now??  Needless to say, June and July were a nerve-wracking blur.

So I spent most of the few months remaining stocking up on bike packing gear of all sorts and sizes.  Another ride I wished I had paid more attention on was the TOSRV ride earlier in the year across a small section of Georgia.  Since I was ultra noob on the bike packing scene, I had initial trouble comprehending the bike setups of some of the riders of this short 160 mile out and bike ride.  Many brains were picked and many opinions were asked which led to this giant spinning whirlwind of choices I still had yet to make.  I finally stopped asking questions and focused on the main objective first.  Water.  How was I going to handle my water filtration?  How was I going to carry my water?  I finalized on a 2L frame bag pouch as well as 2-4 water bottles on the frame.    My first option for water filtration was my personal hiking MSR pump.  It was what I considered lightweight at the time and functional. 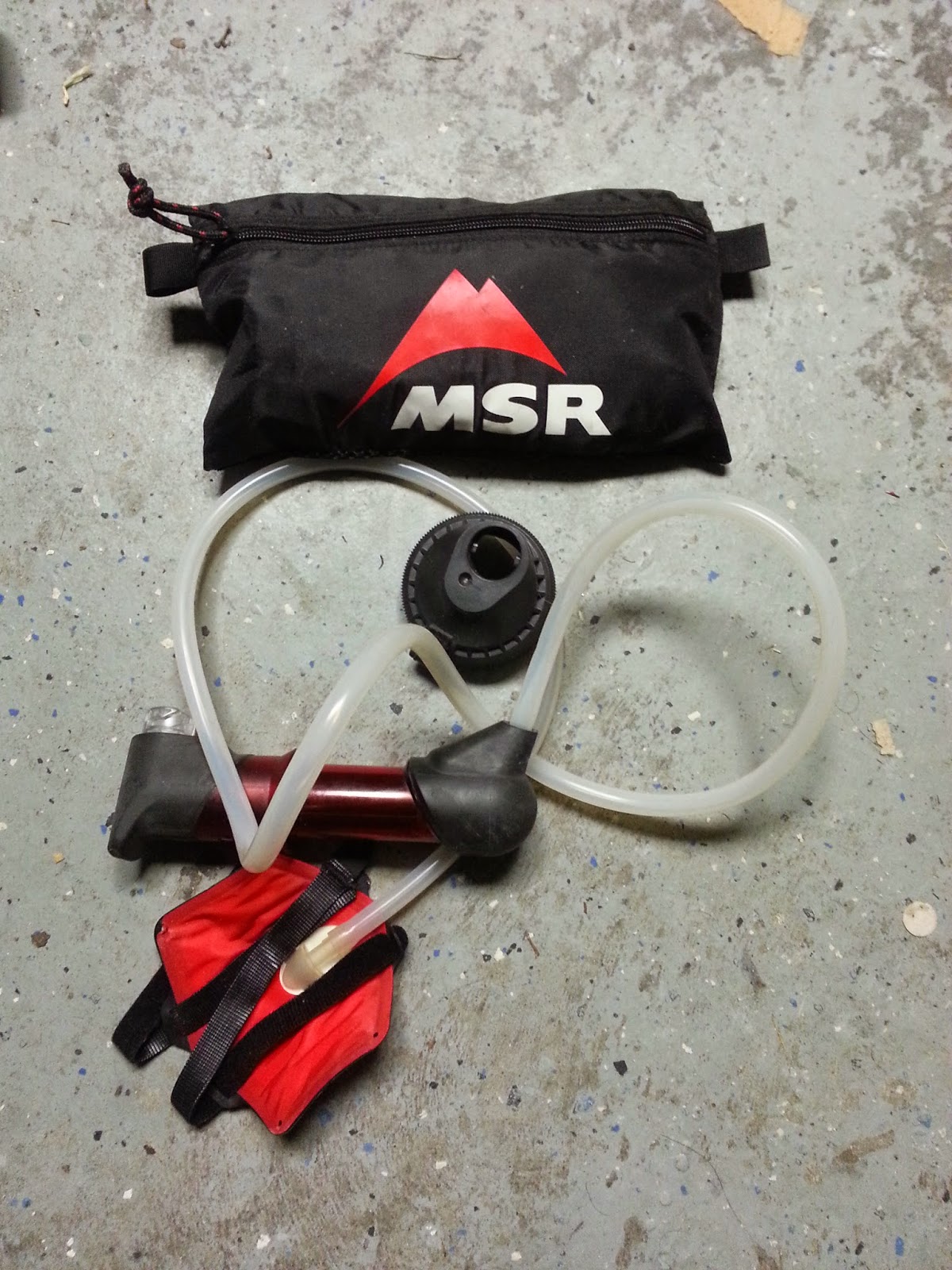 Combined with iodine tablets, it was my immediate solution.  After confirmation with Bill Bailey, a fellow TNGA rider and a water quality specialist, I left that as my choice, until it wasn't.  So there I was water issues handled, kind of in shape, and still not sure which bike choice I would ride.  I finally hashed it out with Mark Sackett and he cleared the issue to 2 simple options: Race TNGA or Ride TNGA?  This was truly the question of the moment.  So after careful evaluation of the extremity of the event, I realized I would not even be close to ready to race this event, so I based that as my decision to load up the workhorse with my gear.  The workhorse in my stable is my Surly Krampus since it can hold a ton of weight in a stable manner, is a fantastic handling mountain bike and can still pedal lightly due to the 3'' tires.  The downside is that hike a bikes were going to be a chore due to the steel frame weight and the oversize tires.  My choice was made and my next step was to outfit the bike with the appropriate tires to handle the ride.  From rider feedback research, I concluded 27tpi Knards should be ordered.  I also installed new brake pads, new narrower handlebars, Ergon comfort grips with long handles, longer 120mm stem for extra room, last but not least, I built a new wheel set based on ZTR Flow Rims with an SP Dynamo power hub for power options.  All in all, I was basically building up a dual sport adventure motorcycle sans the motor.  Other items I picked up later were an eRevo Dynamo light system which worked really well with the SP hub as well as a SineWave USB charge port/ line conditioner. 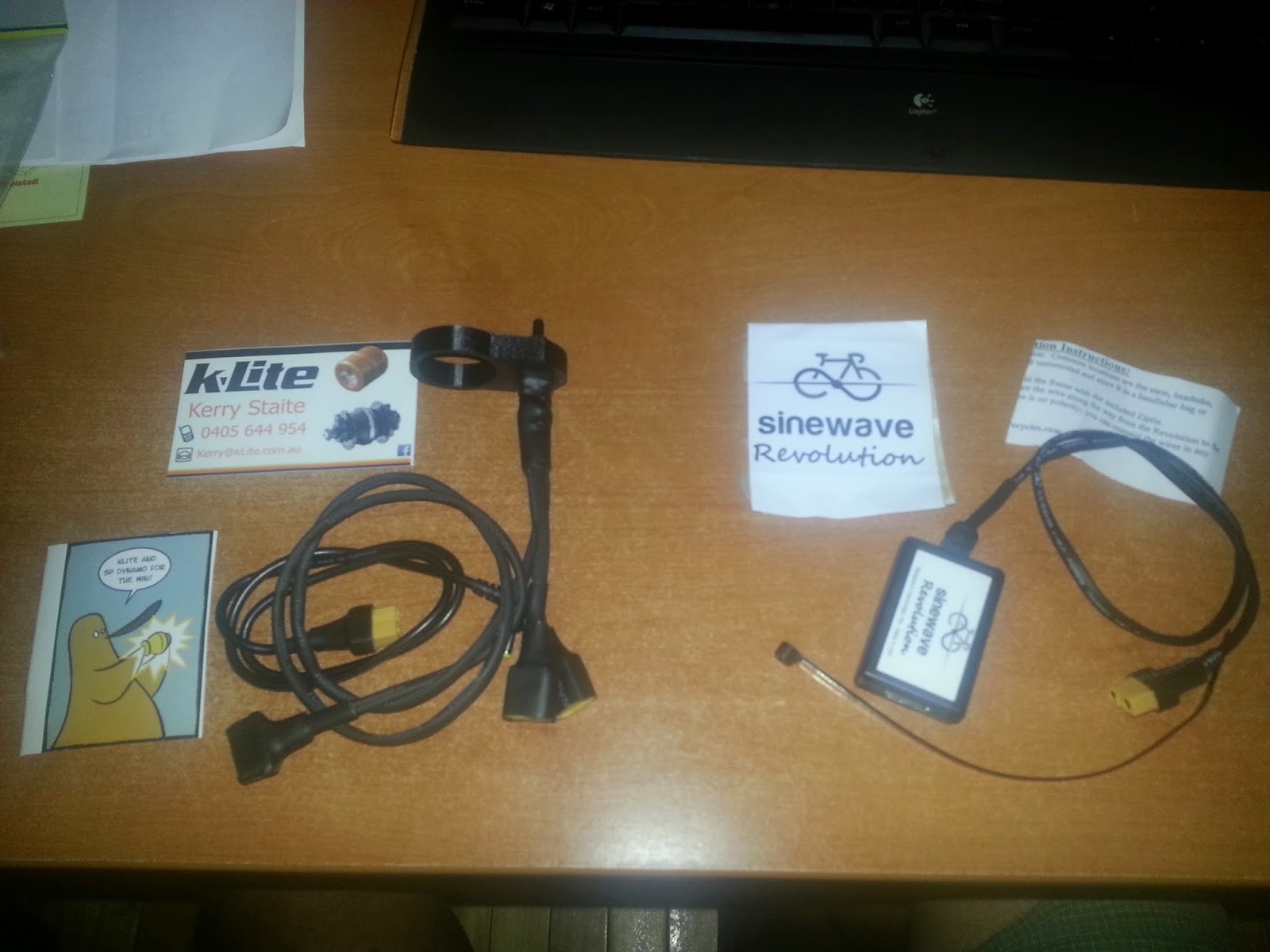 After wiring it all up, I realized I did not like the fact that having a device hooked up to charge was draining on the lights, so I found a site online called kLite and quickly started a detailed conversation with the founder and engineer of the company, Kerry Staite, who asked me for a few pictures of the bike, intended usage and anticipated electrical configuration outcome.  I told him all I know and he responded back with ok mate, got it, now let me do the thinking and you just focus on the pedaling...I laughed so hard and truly allowed him to do the rest as I set out to get some major base miles in while I also thought of bike packing scenarios.

Mid July came quick and I started to panic that not everything was yet in order and a mock dress rehearsal was somewhat imminent.  Revelate bags were in and loaded on the bike.  Handlebar harness started to seem like overkill so I was already planning on nixing it.  Then I worried about what would go in the frame bag as I wanted primary items up front and secondary support items in the tail bag.  Secondary support items varied.  I also changed my MSR for a Sawyer Squeeze which I had recently learned about for ultralite water filtration.  My sleeping system consisted of: a Hennessey Hammock, Ultralite Thermarest, and a SeaToSummit SP1 Sleeping bag.  I also had a mess of survival items as well as a backup bivy to assist if the temp dropped considerably.  The next challenge was to load it all up and work on balancing the load.  This would help determine if I had truly overpacked.  I also wondered heavily if I had packed enough to eat.  I also wondered if I would want to eat what I brought....Preparation was quickly usurping training time.... 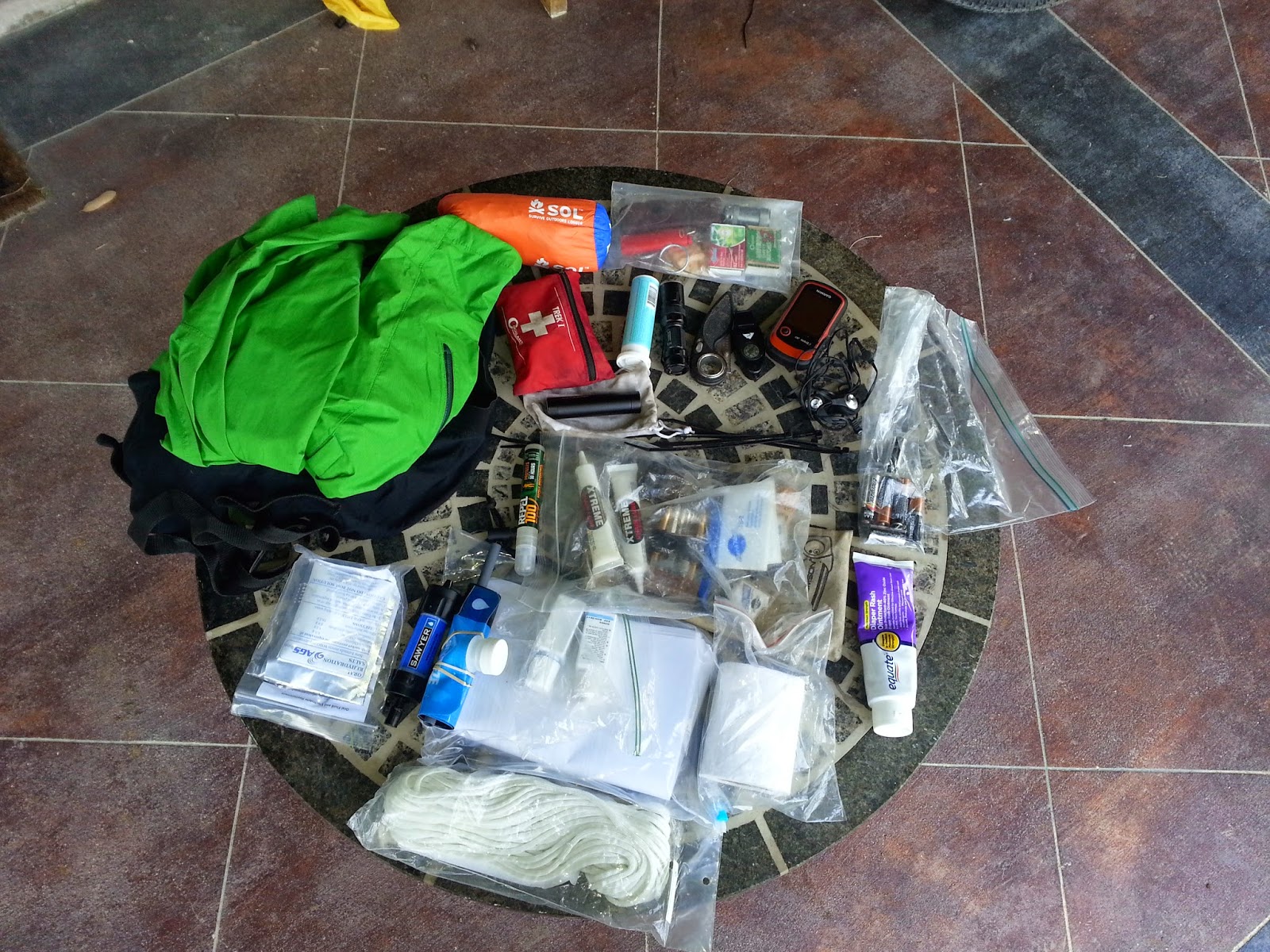 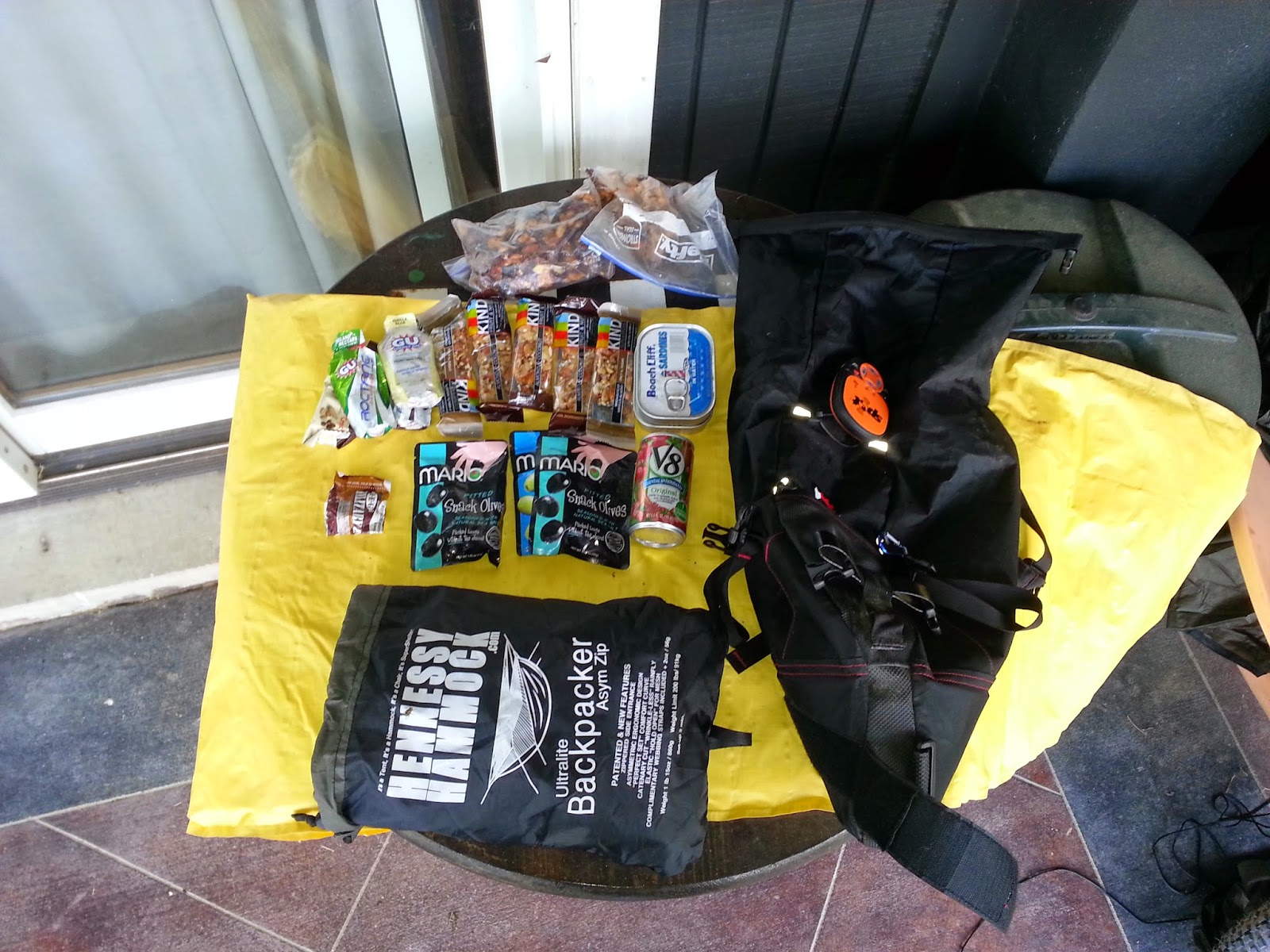 Items that made the final cut:

Items Still on the Fence:
As you can tell, there is a lot of stuff involved in bike packing.  Especially if it is long distance, unsupported riding.  Most of the upper tier racers, were bringing only the bare minimum, but only because they are badasses and know for a fact that they can finish the course in under a few days.  I was not so certain of my potential since I had never ventured this far without some kind of support system, so I prepared for about a weeks worth of time in the field.  Tune in next time when I finally get all of this junk up to Georgia and test it... 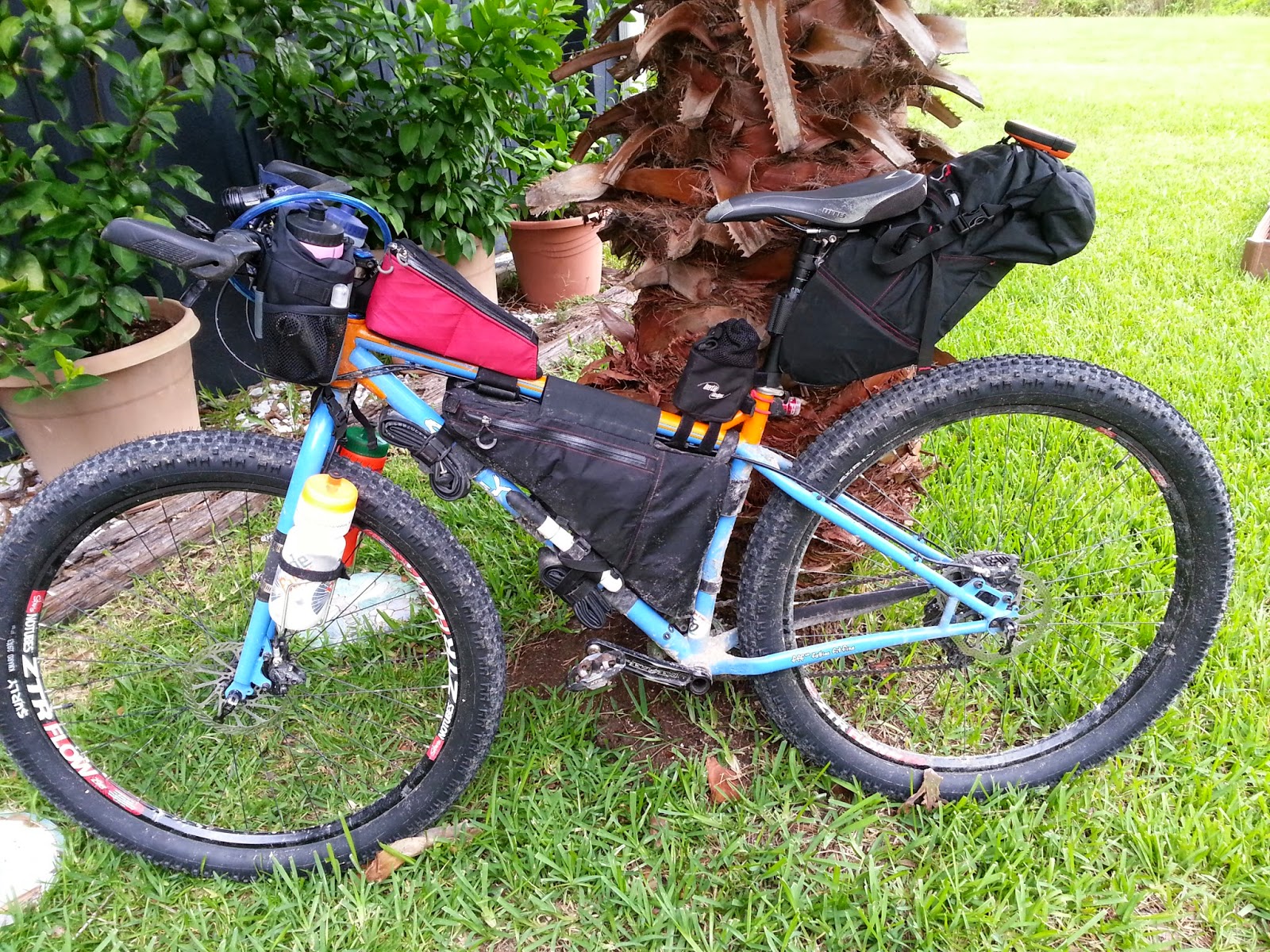 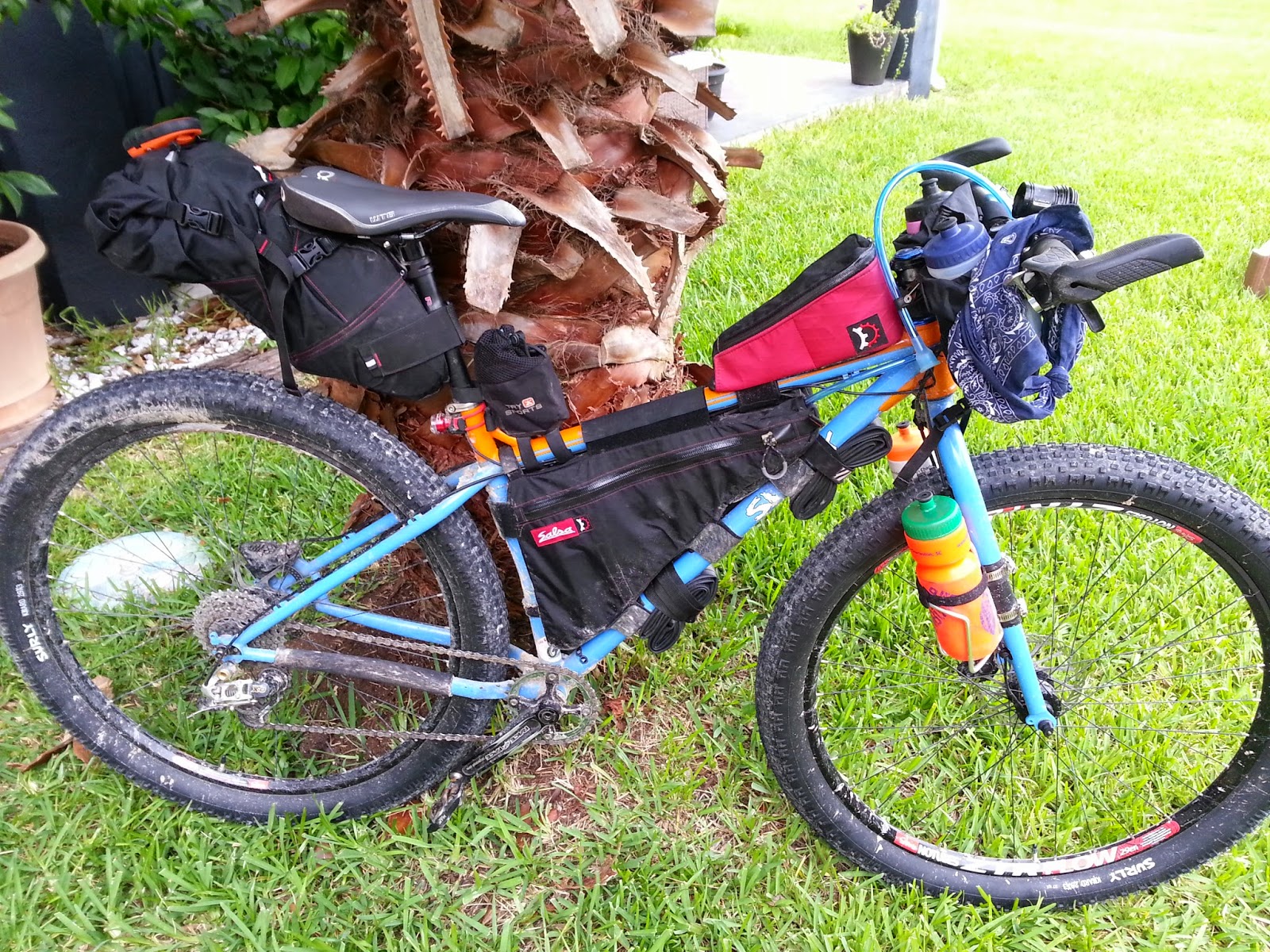 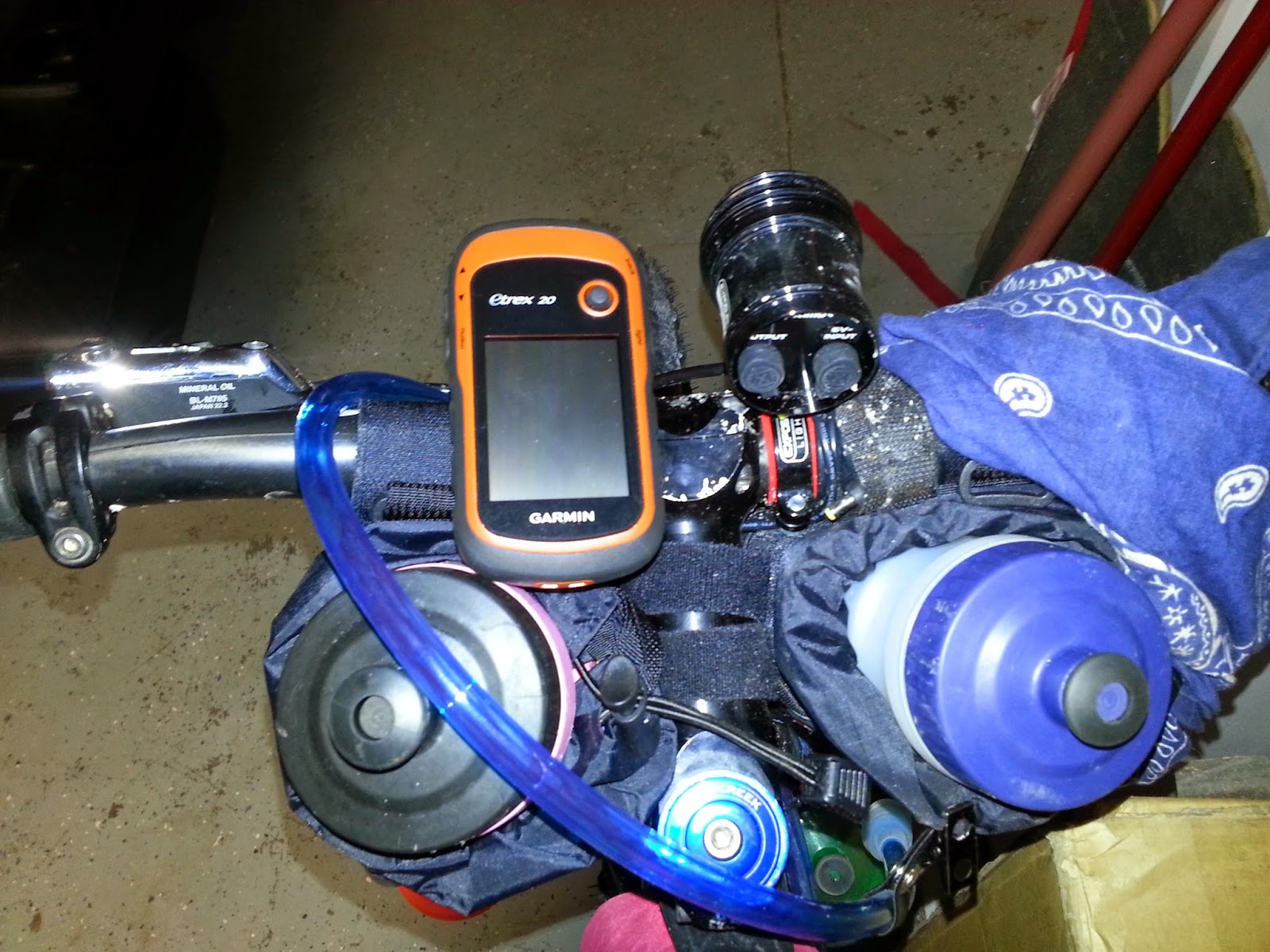 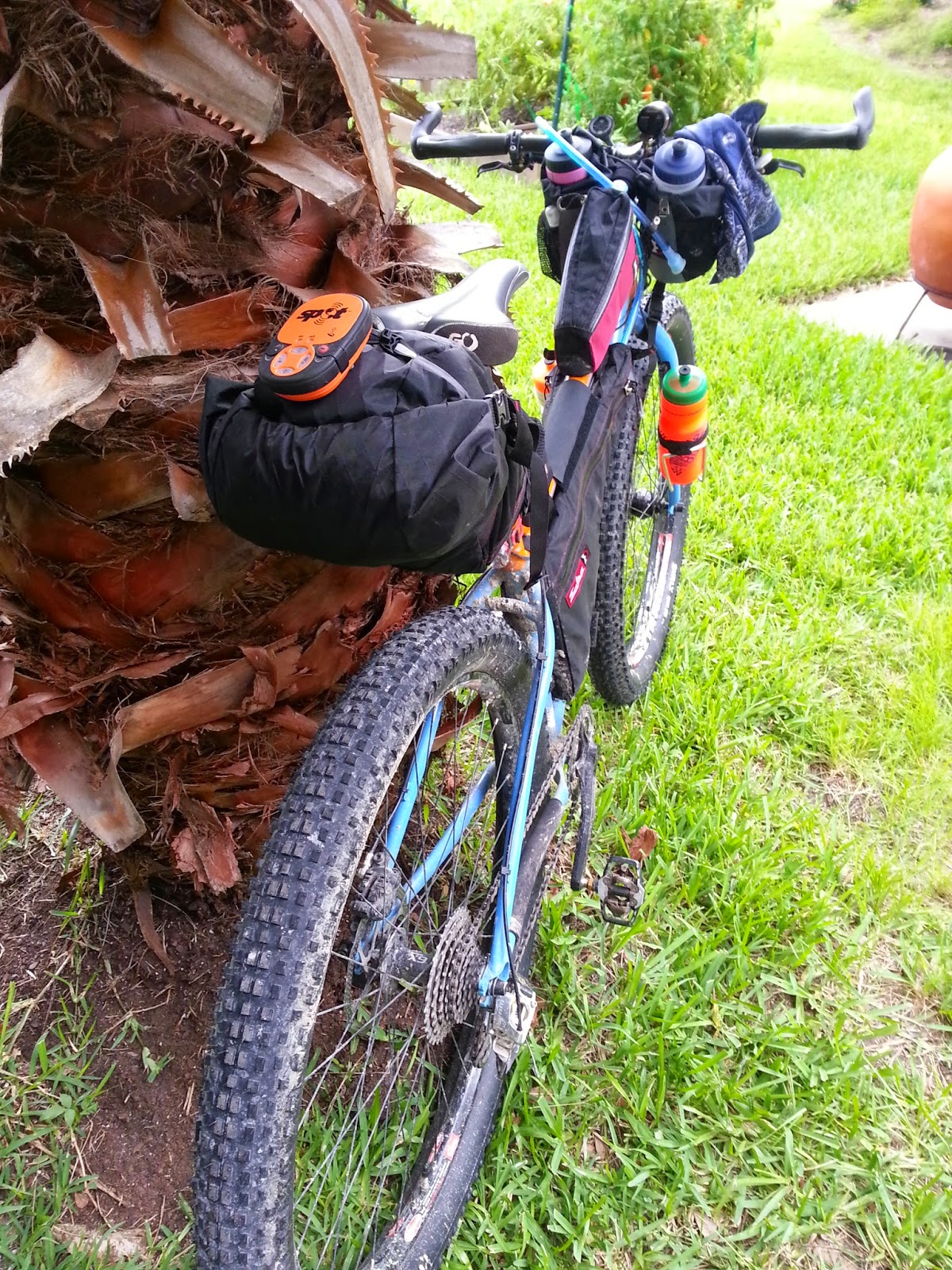